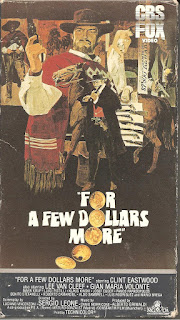 Clint Eastwood Spaghetti Western #3
Synopsis: Two guys who really don’t like each other must join forces to bring a bad guy to justice. Oh wait...that’s sounds like 48 Hours...or Tango and Cash...or Rush Hour, or any buddy cop film ever made.


Blurb From the VHS Jacket: “With bank hold-ups, hair-splitting jail escapes, and suspense-filled showdowns, FOR A FEW DOLLARS MORE is a non-stop action-packed drama; a Western that delivers a mighty wallop in the inimitable Clint Eastwood way.”


What Did I Learn?: If you’re going to shoot a rival’s hat down the street in order to intimidate him into leaving town, you might want to keep track of how many bullets you’ve fired.


You Might Like This Movie If: You pine for the days when bounty hunters were still sort-of cool.


Really?: 1) So wait...Indio (the bad guy) lets our heroes out of his dungeon with unloaded guns, and then kills a couple of his own men because...I’m still not too clear on that one. 2) Was it necessary to keep replaying that creepy pocket-watch music?


Rating: Film aficionados often claim that The Good, the Bad and the Ugly is the finest Eastwood Spaghetti Western ever made, but I dunno – for my money, For a Few Dollars More is just as fun and exciting as TGTBATU, and Lee Van Cleef’s Colonel Mortimer is one of the coolest bad-ass characters to ever grace the silver screen – in fact, he totally upstages Clint. Highly recommended. 9/10 stars.