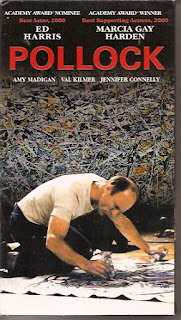 Synopsis: Mean-spirited, paint-dripping alcoholic weirdo gets the motion picture recognition he probably doesn’t deserve.
Blurb From the VHS Jacket: “But with fame and fortune comes a volatile temper and severe self-doubt; before long, Pollock’s life threatens to explode.”
What Did I Learn?: 1) The age of radio, supersonic air travel and the atom bomb could only be expressed artistically by spilling household paint on a horizontal canvas. 2) You can’t abstract from nothing. You can only abstract from life, from nature. 3) Peggy Guggenheim didn’t enjoy walking up stairs. 4) Gene Krupa was the greatest drummer in the world.
You Might Like This Movie If: you really want to get modern art.
Really?: I realize Pollock is based upon a biography, but I’m shocked that Jackson Pollock could get away with pissing in Peggy Guggenheim’s fireplace, openly cheating on his wife in front of their friends, getting shitfaced drunk and erupting into volcanic rages at his friends and family, and he never faces any consequences for his atrocious behavior. (Well, not until the very end) 2) Funny how Pollock does so much to explain its subject’s thinking about art and his work but doesn’t think to tell us why he got into painting in the first place. 3) Why is Val Kilmer in this movie?
Rating: Pollock is a moderately interesting biopic of an incredibly unlikeable title character; Ed Harris delivers an inspired performance as the troubled artist (Marcia Gay Harden is also quite good as Pollock’s long-suffering wife, Lee Krasner), but his direction of the film falls a bit flat. It’s difficult to spend two hours watching a self-destructive jerk verbally abuse his enablers, even if it does provide some insight into the late-1940s / early-1950s modern art scene. 7/10 stars.

Posted by Eli Schuster at 5:19 PM No comments: Links to this post