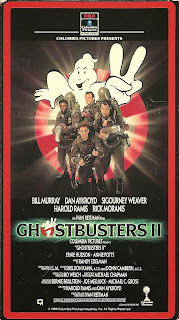 Blurb From the VHS Jacket: “Bill Murray, Dan Aykroyd and Harold Ramis regroup to nuke the spooks in the highly-spirited GHOSTBUSTERS II.”

What Did I Learn?: If you give him a second-rate script and little to do, Bill Murray will basically just mug his way through your movie.

You Might Like This Movie If: You've always wanted to see the sequel to *ahem* Ghostbusters.
Really?: 1) Gee...what are the odds of Dana being the victim of not one, but two powerful, supernatural beings in the course of five years, or that Vigo would choose the one baby in New York City whose mother has close ties to the only people on Earth who can kill him? 2) It’s funny how NOBODY in New York City seems to remember they were once attacked by a Sumerian demon and a giant marshmallow man.  3) I just can’t help myself from thinking that Vigo the Carpathian and the underground river of slime that was created by all of the bad vibes of New York City are two completely different storylines that were slapped together because writers Aykroyd and Ramis wanted to get this turkey made, pronto.

Rating: There’s nothing egregiously wrong with Ghostbusters II, but it is predictable, formulaic, and a big let-down from the 1984 classic. While I enjoyed some of the banter between the leads, Murray mostly looks bored (see “What Did I Learn?”), Vigo pales in comparison with Zuul from the first film, there are a few too many cutesy-poo scenes of Oscar the baby (and the parts when he’s in danger are a bit disturbing), and FAR too many video montages set to bad music. The biggest problem with Ghostbusters II, however, is that it isn’t terribly funny, and it’s chock full of terrible one-liners that don’t work. That’s bad writing. 6/10 stars. 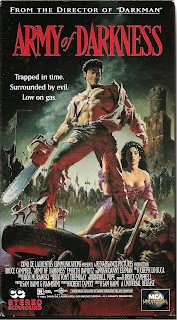 Blurb From the VHS Jacket: “Trapped in time. Surrounded by evil. Low on gas.”

You Might Like This Movie If: You feel the need to watch all of Bruce Campbell’s work.

Really?: Army of Darkness is both a black comedy and a horror/sword-and-sorcery fantasy, so it might not be entirely fair to judge it in terms of its credibility. Ok, maybe I can overlook Ash (Campbell) somehow constructing a mechanical hand for himself using medieval technology, but come on – why does the landscape of England, circa 1300 AD look so much like the Southern California desert? And why do the “Deadites” kill the other humans, but insist upon duking it out with Ash, one fistfight at a time?

Rating: Army of Darkness is the third film in the Evil Dead trilogy (don’t worry – you don’t need to see the first two in order to follow the plot, although I watched them years ago) by Sam Raimi. While the film is light on plot, and some of the special effects are a bit sketchy, Army of Darkness (mostly) works because it never takes itself too seriously, Ash’s quips are often quite funny, and Campbell delivers a tour-de-force performance as a seriously pissed-off ordinary guy who’s ready to kick some undead ass. 7.5/10 stars. 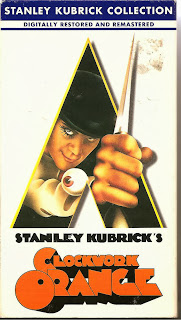 Blurb From the VHS Jacket: “Stomping, whomping, stealing, singing, tap-dancing, violating. Derby-topped teddy-bear hooligan Alex (Malcolm McDowell) has his own way of having a good time. He has it at the tragic expense of others.”

What Did I Learn?: 1) Only psychos enjoy the music of Ludwig van Beethoven. 2) A giant ceramic penis can be used as a murder weapon.

You Might Like This Movie If: You firmly believe Beethoven and Gene Kelly are the perfect musical accompaniments for sex and violence. [Apparently, Kelly was furious about this scene – which is difficult to watch, and not safe for work, by the way]

Really?: A Clockwork Orange is a weird science fiction movie set in a dystopian future, so it might not be entirely fair to judge it in terms of its credibility, but come on... why in the world would Alex belt out “Singin’ in the Rain” near the end of the movie when he knows he’s in a dangerous situation that could get a whole lot worse if the old writer is able to recognize him? That seems incredibly stupid.  Oh – and I can see why the state would want to condition Alex against violence, but consensual sex with another adult?

Rating: I realize A Clockwork Orange is widely considered to be a cinematic classic, but it left me feeling cold. After watching Full Metal Jacket and 2001: A Space Odyssey, it seems to me that Stanley Kubrick had a knack for creating memorable scenes, larger-than-life characters, and visually-stunning films, but had trouble with the basic task of telling a story. The biggest problem with A Clockwork Orange is that aside from the prison chaplain, the movie is devoid of sympathetic characters. The audience is revolted by Alex’s acts of violence early on; enough so, that it’s quite difficult to care one way or another about him after he’s “cured”, and falls on hard times. A Clockwork Orange isn’t a bad movie, but I don’t plan on ever seeing it again. 6/10 stars. 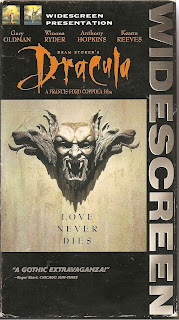 Halloween Movie #3 (Please click the links to read my reviews of other vampire films – Bordello of Blood, Blade, Shadow of the Vampire, and Interview With the Vampire).

Blurb From the VHS Jacket: “In BRAM STOKER’S DRACULA, Coppola returns to the original source of the Dracula myth, and from that gothic romance, he creates a modern masterpiece.”

What Did I Learn?: Apparently, you can turn yourself into a vampire by publicly renouncing God, attacking a cross, and drinking some blood.

Rating: Clocking in at 128 minutes, Bram Stoker’s Dracula takes an awfully long time to get going, drags a bit in the middle – especially the scenes when the Count romances Nina in London, and is too long for my taste. Overall, Bram Stoker's Dracula is a visually stunning film, with good performances from Anthony Hopkins, Winona Ryder and Gary Oldman (Keanu Reeves is quite awful, however) and some genuinely creepy moments. 7/10 stars. Halloween Movie #2 (Hmm... this would have been perfect for my salute to Quentin Tarantino earlier this year)

Synopsis: Sadistic, depraved monsters murder and terrorize innocent human beings...oh yeah, there are some vampires in this movie, too.

What Did I Learn?:  Cheech Marin loves to talk about pussy.

Really?: Oh wow...where do I begin? Do I start with the fact that Richie Gecko (Tarantino) is an evil scumbag, and his brother is an enabler? Do I point out that our heroes manage to kill off Santanico (Salma Hayek) pretty quickly and effortlessly, leaving no archvillain in the movie? Or how about the basic fact that the entire storyline from the first half of the movie is essentially discarded as soon as they hit the Titty Twister? Come to think of it, can a Baptist minister make holy water? I thought that was a Catholic invention.

Rating: From Dusk Till Dawn isn’t a great film by any stretch of the imagination (see “Really?”), but it is a fun popcorn movie, with plenty of thrills, chills, and some genuinely funny lines. Check it out if you’re in the mood for a horror-action-comedy-thriller, and you’re able to set your brain on “pause”.  6.5/10 stars.

Posted by Eli Schuster at 9:54 AM No comments: Links to this post