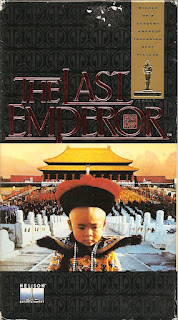 Synopsis: The true story of Pu Yi, Lord of 10,000 years, or Until Somebody Declares a Republic... Whichever Comes First.


Blurb From the VHS Jacket: “It’s an epic adventure. Full of slaves and concubines, empresses, and warlords. The true story of Pu Yi, who, at the age of 3, toddled to the Imperial Dragon Throne to become ‘Lord of 10,000 years,” China’s last emperor. From then on, his was a life marked by the absurdity of fate: from emperor to playboy to prisoner, to, finally, an unskilled gardener in the streets of Beijing.”


What Did I Learn?: 1) Sniffing the Emperor’s poo was apparently a daily ritual among the Forbidden City flunkies. 2) If you want to pee in the middle of the night without waking up your cellmates, it’s best to aim for the side of the bucket, not the middle.


You Might Like This Movie If: You’ve always wanted to see a once-mighty Emperor humbled, and forced to get a real job.


Really?: 1) Either Bernardo Bertolucci wanted to end this movie on an artsy and surreal note, or Pu Yi somehow found the hardiest, longest-living cricket in existence to keep in a jar right behind his throne. 2) I wasn’t expecting a sermon on the importance of personal responsibility from a communist prison warden, but the dude made a lot of sense.


Rating: The Last Emperor is a visually stunning film with a fascinating story and a number of strong performances. It’s truly a masterpiece. 10/10 stars.