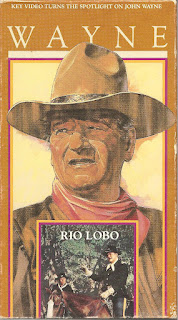 
Blurb From the VHS Jacket: “When a former Union colonel vows to track down the traitor responsible for the killing of a young officer, his quest leads to a battle to the death with a gang of ruthless desperadoes.”


What Did I Learn?: Back in the Old West, hiding under the bed was still a relative new idea for eluding bad guys - and it worked!


Really?: So...the Confederate vets befriended by Wayne’s character settle down in the very same Texas town that’s controlled by the traitor he wants to find? And he’s only a three-day horse ride away? That seems awfully convenient...


Rating: Rio Lobo is one of the weakest John Wayne westerns. It starts off with an exciting Civil War train robbery, and then gradually loses steam. Wayne’s quest to find the traitors gets sidelined near the end by the need to kill a sadistic sheriff, and believe it or not – this film basically ends with yet another re-enactment of Rio Bravo and El Dorado: Wayne and friends (including a Walter Brennan-type played by Jack Elam) have the big boss in the town jail, and they have to make an exchange for one of their friends. Sorry - been there, done that. 6/10 stars.