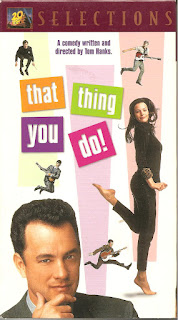 
Blurb From the VHS Jacket: “Tom Hanks writes, directs and co-stars in this refreshing, big-hearted comedy that captures the overnight triumph of an American rock band during the glory days of rock and roll.”


What Did I Learn?: The music industry is staffed with honest, caring professionals who want to see their clients succeed. The real problem comes from moody and frustrated “artists” who make bad decisions and try to have everything their own way.


You Might Like This Movie If: You enjoy good-natured stories that involve drum-playing, and working together for a common goal.


Really?: 1) Was it really necessary to replay the title song 386 million(*) fucking times throughout the movie? 2) A few scenes suggest the bass player is dating – or at least spending time with – a chick from a black girl band, and yet there’s no backlash from the press or the record label...this is 1964, remember. 3) The band replaces the bass player when he fails to show up for a TV gig, and then...there’s no follow up? The guy just vanishes from the movie –that’s just lazy scriptwriting.


Rating: That Thing You Do is a nice, unassuming little film, but I have two complaints; first, it’s not nearly funny enough to work as a comedy, and it’s too sugar-coated and uncritically nostalgic to work as a period drama. Second, what’s the deal with all the disappearing characters? What was the point of casting Charlize Theron as the protagonist’s girlfriend when she takes a hike in the first half hour? 6.5/10 stars.