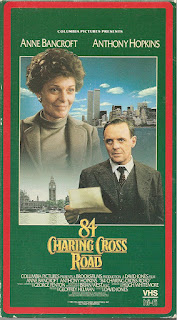 
Blurb From the VHS Jacket: “Anne Bancroft and Anthony Hopkins sparkle in this witty, touching drama about a transatlantic romance that begins at 84 CHARING CROSS ROAD. Helen Hanff (Bancroft), a vivacious New York writer with a passion for literature, writes to a London bookstore in search of rare English classics. Frank Doel (Hopkins), a good-natured, reserved Englishman, answers her request – thus beginning an extraordinary relationship that spans two continents and two decades.”


What Did I Learn?: You can’t trust London cab drivers not to take you for a ride, and don’t bother with street maps, because even Londoners can’t figure out the city.


You Might Like This Movie If: You get really, really excited by the idea of visiting abookstore on Charing Cross Road. (This is a weird video...)


Really?: Considering the film starts in 1949 and ends – at the latest – in 1971, why does the VHS jacket feature a shot of the completed World Trade Centre twin towers, which weren’t finished until 1973? (By the way: have you noticed that even when Anthony Hopkins isn't playing Hannibal Lecter, he still looks as though he's thinking about eating your face?) 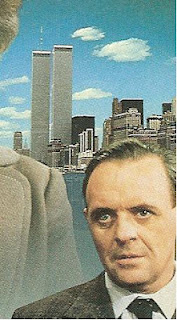 Rating: I wanted to really like 84 Charing Cross Road – it’s an intelligent, well-written film with a couple of excellent performances from Bancroft and Hopkins. Trouble is, there’s no conflict, and nothing really happens until the end. The movie was based upon a successful two-person play, and I suspect that a lot of the character-driven dialogue probably went out the window when new characters were created to flesh out a film version. Nice little movie, but that’s about it. 7/10 stars.