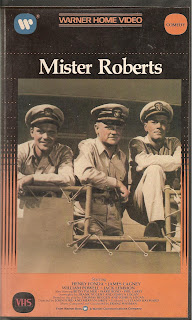 
Blurb From the VHS Jacket: “Month after month, beneath a blazing Pacific sun, the Reluctant carries cargo from port to port along the forgotten seaways of World War II. Its crew is going crazy. Somewhere, below the horizon, the war – the real war – is passing them by.”


What Did I Learn?: You can make “scotch” with medical alcohol (I’m assuming it’s ethanol, rather than methanol, or somebody could wind up blind or dead), a bit of warm Coca-Cola, and a few drops of iodine.


You Might Like This Movie If: You would much rather sit down for a beer with Henry Fonda than James Cagney.


Really?: 1) Nobody seems to think it’s disturbing, or a breach of Navy discipline when the men use binoculars and telescopes to blatantly leer at nurses getting changed on a nearby island. 2) Funny how the PA system is mistakenly left on during a private conversation between Roberts and the tyrannical captain, and the men suddenly realize what’s going on.


Rating: Goofball comedy and serious themes mix uneasily in Mister Roberts (I think it probably worked better as a stage play), making it a difficult movie to “get”. It hasn’t aged well, but I would recommend Mister Roberts, if only to watch Henry Fonda, James “you dirty rats!” Cagney, and Jack Lemmon together on screen. 7/10 stars.