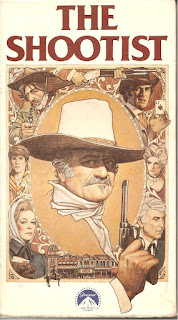 
Blurb From the VHS Jacket: “Afflicted with a terminal illness, John Bernard Books (John Wayne), the last of the legendary gunfighters, quietly returns to Carson City for medical attention from his old friend Dr. Hostetler (James Stewart). Aware that his days are numbered, the troubled man seeks solace and peace in a boarding house run by a widow (Lauren Bacall) and her son (Ron Howard). Instead, Books is embroiled in one last valiant battle and dies with honor.”


What Did I Learn?: Once you’ve been diagnosed with an incurable cancer, instead of dying a slow and agonizing death, the best course of action is to whip out the old pearl-handled revolvers and take as many scumbags with you as possible.


Really?: Why would a casino hire a faro dealer who enjoys shooting customers over minor insults? Wouldn’t that professional relationship end rather quickly?


Rating: If you’re expecting an action-packed Western such as Rio Bravo, or The Sons of Katie Elder, The Shootist isn’t the John Wayne film for you. There isn’t much bang-bang in The Shootist, but it is a poignant, and moving drama with some wonderful performances and a truly suspenseful ending. I would call it Wayne’s best film. 9/10 stars.