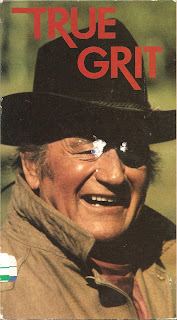 
Blurb From the VHS Jacket: “John Wayne was given an Oscar for his performance as the drunken, uncouth, one-eyed US marshall Rooster Cogburn in this extraordinary Western. Cogburn is hired by a young girl (Kim Darby) to kill the man who murdered her father and stole the family nest egg, and she insists on accompanying Cogburn on his quest. Cogburn isn’t happy about this, nor with the Texas Ranger (Glen Campbell) who tags along to cash in on the reward.”


What Did I Learn?: If you know your boss is a vicious sociopath, you might want to re-think the idea of offering him a lift on your horse immediately after his has been shot dead in a gunfight. Just saying...


You Might Like This Movie If: You think John Wayne did his best work while wearing an eye-patch.


Really?: (see What Did I Learn?) I wonder if it was a bit difficult for Robert Duvall to get the rest of the gang to trust him again after Duvall pulled one of his buddies off his horse when the man was trying to help him out of a jam.


Rating: True Grit is a wonderful, yet strange John Wayne Western – Wayne isn’t the protagonist (in this case it’s Kim Darby as the prim-yet-plucky Mattie), and he doesn’t simply play himself, although Rooster isn’t that far removed from the iconic John Wayne, as he does in most of his other movies. Wayne, Darby and Campbell share an interesting chemistry as three individuals who really don’t like one another, but they’re forced to work together under unusual circumstances. 8.5/10 stars.