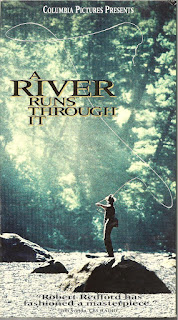 Synopsis: Take an episode of Bassmasters, set it in early 20th Century Montana, throw in Brad Pitt, and you have A River Runs Through It.


Blurb From the VHS Jacket: “Craig Sheffer stars as the young Norman Maclean, and Brad Pitt also stars as his brother Paul, an irresistible daredevil driven to challenge the world. Growing up, both boys rebel against their stern minister father. While Norman channels his rebellion into writing, Paul descends a slippery path to self-destruction.”


What Did I Learn?: Addressing your younger sister’s fiancée for the first time with “hi boy” isn’t the best way to earn his respect.


You Might Like This Movie If: You relate to characters who talk about spending time...um...down by the river.


Really?: 1) Did the folks in rural Montana, circa 1926 spend much of their time sipping martinis and listening to jazz? I would have imagined it to be much more of a beer and country music sort of place. 2) I realize Paul (Pitt) is supposed to be headstrong and careless, but come on... if you owe the local casino a ton of money, and their goons roughed you up the last time you arrived to gamble, you don’t go back for more. You just don’t.


Rating: A River Runs Through It is a slow-moving, yet meaningful character-driven drama (Robert Redford’s narration of Maclean’s prose is especially good) with some of the most beautiful scenery ever captured on film. Highly recommended. 8.5/10 stars.