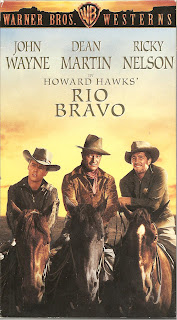 
Synopsis: Grumpy sheriff and comic-relief sidekicks set out to prove that Gary Cooper was actually a pussy in High Noon.


Blurb From the VHS Jacket: “On one side is an army of gunmen dead-set on springing a murderous sidekick from jail. On the other is Sheriff John. T. Chance and his two deputies: one a drunk, the other a cripple. Take your bets.”


What Did I Learn?: The best way to wean an alcoholic off of whisky is to provide him with lots and lots of beer. Oh, and don’t be polite or respectful to him, or he’ll fall apart and hit the sauce again.


You Might Like This Movie If: You’ve always wanted to watch Dean Martin and John Wayne attempt to unite Americans through...um... I guess this is supposed to be comedy.


Really?: 1) Didn’t anyone think it was a bit creepy to watch 50-something Wayne romance 20-something Angie Dickinson? 2) So, Ricky Nelson is an 18-year old ranch hand with a Machiavellian mind who can figure out all the angles? I don’t think so...


Rating: Rio Bravo is a fun, and richly entertaining Western, and it’s wonderful to watch the interactions between Wayne, Dean Martin, and Walter “Stumpy” Brennan, but I do have a few complaints: a) Ricky Nelson is not a good actor, b) Wayne is way too old for Dickinson, and c) the ending is rather anti-climactic, and should have been re-written. 8/10 stars.