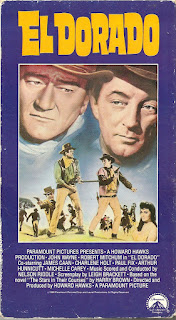 
Synopsis: It’s Rio Bravo, with actors instead of singers for sidekicks.


Blurb From the VHS Jacket: “Robert Mitchum plays the alcoholic sheriff who fights greedy cattlemen and empire builders as he tries almost single-handedly to tame the West. John Wayne is Mitchum’s old-friend-turned-gunfighter who comes to town. James Caan offers an eccentric and likeable performance.”


What Did I Learn?: If there’s a bullet in your back that’s the cause of occasional pain spasms and numbness in your right hand, and your doctor warns you the symptoms will only get worse unless you have it removed, you might want to listen to him.


You Might Like This Movie If: You wonder why John Wayne didn’t simply go to this place after he was shot.


Really?: 1) On the basis of one pistol-firing lesson – during which the student shoots at, and misses a cactus - Wayne concludes Caan is hopeless, and should simply buy a shot-pistol. 2) We learn that Caan is an expert knife-thrower...funny how that skill is never used later in the film.


Rating: El Dorado is a faster-paced remake of Rio Bravo. It’s still entertaining, and both Wayne and Mitchum are great, but Arthur Hennicut isn’t nearly as charming as Walter Brennan, while Dude’s (Dean Martin) struggles with depression and sobriety are axed in favour of cheap laughs. 7.5/10 stars.