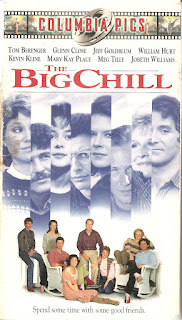 Synopsis: Self-absorbed hippies-turned-yuppies wallow in Boomer nostalgia and perfect the art of the 1960s-soundtrack video montage.


Blurb From the VHS Jacket: “Celebrate good friends, classic music and ground-breaking moviemaking with the 15th Anniversary Collector’s Edition of THE BIG CHILL!”


What Did I Learn?: If you can’t get laid with an old flame who’s desperate to have a kid, and she’s propositioning the other guys at a weekend retreat, it’s time to reassess your approach with the ladies.


You Might Like This Movie If: You’ve always wanted to watch Tom Berenger basically play Lee Horsley.


Really?: Wow...is every character in this movie rolling in dough? Even Nick (William Hurt), the guy who quit his PhD and ran away from being a radio shrink, drives a Porsche.


Rating: The Big Chill isn’t everybody’s cup of tea. It’s well-written, and the film features some excellent performances from the entire cast. It’s very much a character-driven movie, so if you need to follow a plot, 105 minutes of 30-somethings talking about their feelings can get a bit tedious. While I like this film, I can’t say that I’m a huge fan of self-congratulatory Boomer nostalgia, so let’s just say that I have mixed feelings. 7.5/10 stars.