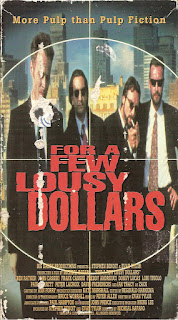 Synopsis: It’s just like Pulp Fiction...except the dialogue is weak, the acting sucks, and the soundtrack consists almost entirely of songs written-and-or-performed by Peter Allen and Evan Taylor.


Blurb From the VHS Jacket: “Three friends, Danny, Theo and Zack, are about to commit the heist of their lives – holding up a restaurant which they know is run by the local mob. Their friend Franky tipped them off about a large gambling stash that was supposed to be in the restaurant – but when the boys show up the loot isn’t there and Tony, the Mob boss is!”


What Did I Learn?: If you’re going to hold up a pizzeria that’s actually a mob front, for the love of God, wear a mask, and take a piss before you leave the house.


You Might Like This Movie If: You think it’s a good idea to base your independent movie on thestyle of a hyperactive lunatic with an encyclopedic knowledge of film.


Really?: 1) Apparently, the local crime boss spends his days making pizzas in a local Italian eatery. 2) Funny how the not-so-tough local losers (one guy’s a vegetarian, for crying out loud!) become cold-blooded killers by the end of the movie.


Rating: In spite of its title, For a Few Lousy Dollars has nothing to do with Clint Eastwood spaghetti westerns; instead, it’s a tribute (some might call it a rip-off) to Quentin Tarantino’s body of work up until the mid-1990s. Alas, FAFLD isn’t terribly clever or exciting, much of the acting is sub-par (Judd Nelson is one of the few exceptions, and he looks embarrassed to be there...is that why he’s listed in the credits as “Midnight Runner”?), and the film sorely lacks Tarantino’s knack for writing true-to-life, pop culture-influenced dialogue; the villains discuss the merits of Melrose Place, for instance, and nobody has anything particularly interesting to say about it. I cannot recommend this movie. 5/10 stars.