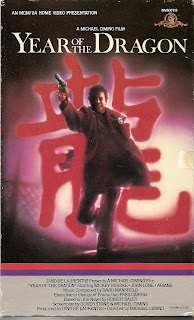 Happy Chinese New Year! Ok, I know...I know... I’m 16 days late, and it’s the Year of the Monkey, not the Dragon. I’ve been busy with a bit of freelance work.

Synopsis: Dedicated cop cleans up Chinatown by, um... turning long-time friends on the police force into enemies, beating a suspect to a bloody pulp in front of hundreds of witnesses, and otherwise throwing away the Bill of Rights.

Blurb From the VHS Jacket: “For colorful, tense, two-fisted action, this Dragon roars!”

What Did I Learn?: 1) A great man is one who in manhood still keeps the heart of a child. 2) Dollars are like small fish, difficult to catch, but not to be thrown back except as bait for something bigger. 3) A fish stinks from the head down. 4) If you’re in the heroin wholesaling business, adopting the nickname “White Powder” might make you a target for cops and rival gangsters. Just sayin’.

You Might Like This Movie If: You could easily imagine Mickey Rourke taking on a major crime syndicate.
Really?: 1) I have to ask: did Ariane actually audition for her part? I mean, she’s incredibly attractive, but wow – she’s also one of the worst actresses I’ve ever seen in a major motion picture. 2) Funny how Joey Tai pretty much declares war on the Italian Mafia and then....nothing. The audience is informed near the end that the Mafia is fighting back, but we never see any of the back-and-forth. 3) See: “Synopsis.” Seriously, I realize this movie takes place 30 years ago, but I had a hard time believing a Caucasian police captain could get away with a cracking-heads policy in New York’s Chinatown without generating some sort of political backlash. And holy cow, why doesn’t it occur to Joey to hire a lawyer and sue the city after White (Rourke) beats him senseless in a nightclub? 4) Take a drink every time ordinary dialogue suddenly transforms into outright editorializing. Ok, maybe one character might deliver an impromptu speech on Chinese-American history, but three or four? Come on....

Rating: Year of the Dragon is a stylishly-made, but somewhat-dated crime thriller that was directed by Michael Cimino and co-written by Cimino and Oliver Stone. While I liked the interplay between Rourke and John Lone (they're both quite good, although Rourke's character isn't terribly likeable), the film is a bit too long, and frankly, the script could have used a lot of tightening-up (See: "Really?" and "Synopsis."). 6/10 stars. 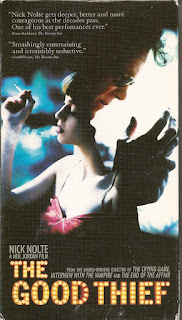 Blurb From the VHS Jacket: “Sexy, stylish, violent, The Good Thief tells of compulsive gambler Bob Montagnet (Nick Nolte: The Thin Red Line, The Hulk), as he plans the heist of his life – a priceless collection of art from the world-class Casino Riviera in Monte Carlo.”

What Did I Learn?: Apparently, it’s relatively easy to kick a heroin habit if you have to clear your mind for a big job.

You Might Like This Movie If: You're fascinated by the idea of becoming an art thief.
Really?: 1) See: “What Did I Learn?”  Seriously, why make Bob (Nolte) a drug addict? It doesn’t add anything to the plot, and it seems highly unlikely that such a master criminal would engage in such self-destructive behaviour. 2) So, wait – Bob sells a phony Picasso to a gangster to raise some working capital for the big job. Gee...what did he *think* would happen next? 3) Hmm...if Paolo is out of the picture, wouldn’t Philippa make arrangements for one of her other colleagues to turn the spider-infested gas crank? 4) Apparently, French people are still embarrassed when Johnny Hallyday's name is mentioned.

Rating: The Good Thief is a slow-moving, but mostly enjoyable caper drama featuring Nolte on the exotic French Riviera. Still, I could have done without all of that damned techno music. 7/10 stars.
http://www.imdb.com/title/tt0281820/?ref_=nv_sr_1
Posted by Eli Schuster at 3:51 PM No comments: