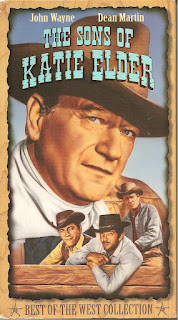 
Blurb From the VHS Jacket: “Katie Elder bore four sons. The day she is buried they all return home to Clearwater, Texas, to pay their last respects. John Wayne is the eldest and toughest son, the gunslinger. Tom (Dean Martin) is good with a deck of cards and good with a gun when he has to be. Matt (Earl Holliman) is the quiet one – nobody ever called him yellow...twice. Bud (Michael Anderson Jr.) is the youngest. Any hope for respectability lies with him.”


What Did I Learn?: Every once in a while, it’s a good idea to ask your parents how they’re doing...are they happy? Is the weather nice? Is there an evil rancher and gun nut trying to cheat them out of the family homestead?


You Might Like This Movie If: You enjoy watching Wayne and Martin return to those thrilling days of yesteryear.


Really?: 1) These guys are brothers? Aside from bearing no resemblance to each other, John Wayne was 36 years older than Anderson when they made this movie!  2) Siblings usually choose sides when they fight each other; I don’t think four-way, everyone-against-everyone fistfights are all that common.


Rating: The Sons of Katie Elder is a fun and suspenseful Western with some nifty performances (a rather young Dennis Hopper plays the villain’s cowardly son, and George Kennedy is quite good as a nasty gun-for-hire) and interesting plot twists. It’s an odd film that juxtaposes light-hearted comedy with some genuinely dark moments, and it touches real emotions. But yeah...they’re totally not brothers. 8.5/10 stars.