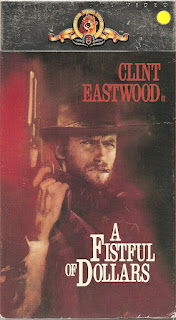 
Blurb From the VHS Jacket: “A Fistful of Dollars is the Western taken to the extreme – unremittingly violent, gritty realism and at times delightfully tongue-in-cheek. Sergio Leone’s direction is taut and stylish, and the visuals are striking – from breathtaking panoramas (in Spain) to extreme close-ups of quivering lips and darting eyes before the shoot-out begins.”


What Did I Learn?: I don’t want to provide any spoilers, but you know that old Mexican saying about what happens when a man with a .45 meets a man with a rifle? Um...let’s just say you shouldn’t put too much stock into it.


You Might Like This Movie If: *Sigh*....you fondly remember a time when a fistful of dollars actually meant something.


Really?: 1) It’s funny how none of Ramon’s rifle shots make a special dinging sound when they ricochet off Clint’s body armour...and if Ramon is such a good shot, you would think he might attempt a head shot. 2) It’s fortunate that a seriously wounded Clint is locked in a wine cellar with a giant barrel perched on a ramp that leads right to the only door. 3) Clint is paid numerous times by both families...would it be all that difficult for him to settle his food and lodgings bill with the nice hotel owner? 4) So, what happened to that government investigation into the massacre?


Rating: A Fistful of Dollars is a fun and enjoyable Western. 8/10 stars.