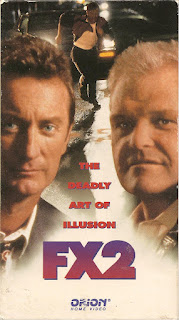 Synopsis: It’s basically F/X, with a slower pace and an animatronic clown.


Blurb From the VHS Jacket: “It’s been five years since special effects (FX) expert Rollie Tyler (Bryan Brown) and cop Leo McCarthy (Brian Dennehy) teamed up to relieve the mob of $15 million through their unique combination of deception and detection... When the police ask for Rollie’s help to catch a homicidal maniac, he reluctantly agrees. But it’s Rollie who gets caught in the deadly trap, an elaborate set-up designed to hide a massive conspiracy.”


What Did I Learn?: Wieners and instant mashed potatoes are essential tools if you plan on staging a two-man invasion of a mob safe house.


You Might Like This Movie If: You feel this guy should have his own movie. (Holy cow... you wouldn’t believe how many youtubes pop up when you type in the words: “animatronic clown”).


Really?: 1) So wait...Leo grabbed $7.5 million in the first movie, and he’s now driving a battered, de-commissioned Checker cab and working as a sleazy PI? I realize the bar he opened wasn’t a success, but how did he burn through $7.5 million? 2) If the bad guys wanted to kill an honest cop, wouldn’t it be so much simpler to simply shoot him and make it look like a robbery instead of going through some elaborate set-up of a serial killer who might not do as he’s expected?


Rating: Wow, F/X2 is a mess...on the one hand, it’s highly derivative of the first film (Rollie works for the cops and gets burned, and then it ends with Rollie taking out the bad guy’s henchmen, one-by-one during an invasion of the hideout), yet the pace is much slower, the plot is convoluted, and the ending is highly unsatisfying. The film starts with the murder of a good cop, yet the triggerman escapes punishment (although that’s never made entirely clear) and it somehow ends with Rollie and Leo receiving yet another big payoff. Give me a break... Watch it with friends for a Bad Movie Night.  5.5/10 stars.