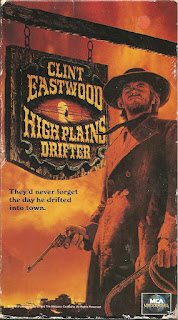 I had so much fun reviewing the John Wayne Westerns earlier this month that I decided to attempt a Clint Eastwood Spaghetti Western theme. High Plains Drifter isn’t actually a Spaghetti Western (unlike The Good, the Bad, and the Ugly, A Fistful of Dollars, and For a Few Dollars More, HPD was filmed in the United States rather than Italy, and therefore doesn’t qualify), but Clint plays his familiar Man-With-No-Name character, so I figured I would review it, anyway. (BTW: John Wayne hated this movie)


Blurb From the VHS Jacket: “Clint Eastwood portrays a mysterious stranger who emerges out of the heat waves of the desert and rides into the guilt-ridden town of Lago. After committing three murders and one rape in the first 20 minutes, The Stranger is hired by the town to protect it from three gunmen just out of jail.”


What Did I Learn?: It’s always a good idea to sleep with a stick of dynamite handy...just in case.


You Might Like This Movie If: You aren’t troubled by the idea of spending your hard-earned money on somebody – or something –with no name.


Really?: I had a bit of trouble believing: a) the town has no other options than to hire Clint (doesn't anyone know where to find a telegraph machine?), b) nobody except Clint can shoot straight, or c) that the townsfolk would put up with his increasingly onerous and silly demands. Oh, and if Clint really is Marshall Jim Duncan, or his ghost, or a reincarnation of the Marshall, why doesn’t anyone recognize him?


Rating: High Plains Drifter is a competent and enjoyable Western, although it drags in places, and Clint’s character isn’t all that likeable. Come to think of it, nobody’s terribly nice in this movie. 7/10 stars.