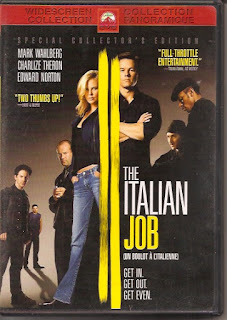 Synopsis: Mark Wahlberg mugs his way through formulaic, by-the-numbers remake of classic 1960s heist film.
Blurb From the DVD Jacket: “The plan was flawless. The execution was perfect.”
What Did I Learn?: 1) Never mess with mother nature, mother-in-laws, and mother-freaking Ukrainians. 2) FINE stands for Freaked Out, Insecure, Neurotic and Emotional. 3) There are two kinds of thieves in the world: the ones who steal to enrich their lives and those who steal to define their lives.
You Might Like This Movie If: You're secure in the knowledge that such a massive gold heist could never happen in real life.
Really?: 1) Is there some reason Charlize Theron’s character spends nearly the entire film wearing sleeveless shirts and tank tops? 2) Steve (Edward Norton) richly deserves to meet with an unhappy ending, but gee… couldn’t he have gone to jail, or died from a bullet wound. Knowing he’s about to be horribly tortured to death by Ukrainian gangsters sort-of ruined the ending for me. 3) So, Steve changes his plans to move the gold at the last minute, and the gang is somehow able to change everything, and even develop a complex alternative counter-plan over the course of an evening? 4) Handsome Rob (Jason Stratham) is touted as one of the world’s best wheel-men, except that Stella (Theron) and Charlie (Wahlberg) are also skilled high-speed drivers, which really diminishes his character. 5) Gee…that romance between Stella and Charlie seems awfully tacked-on.
Rating: The 2003 remake of The Italian Job reminded me a great deal of the new-and-improved Ocean’s Eleven (see: “Synopsis”): slick, fast-paced, and stylishly-directed with lots of impressive special effects, but also bland, and populated with two-dimensional characters spouting forgettable dialogue. It’s ok, but far from great. 6.5/10 stars.

Posted by Eli Schuster at 6:54 PM No comments: 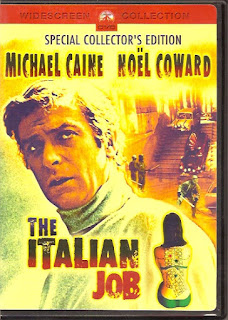 Synopsis: Loveable band of thieves pull off daring European gold robbery….oh, wait - that’s Kelly’s Heroes. Um….Michael Caine plans a heist with a sexy dame. No, that’s Gambit. Um…intrepid adventurers anger powerful enemy when they plunder something of great value. No, that’s Conan the Barbarian.
Blurb From the DVD Jacket: “Forget about the straight and narrow. Clever con Charlie Croker (Michael Caine) intends to go straight to the bank.”
What Did I Learn?: 1) They serve spaghetti four times a day in the Italian prisons. 2) Everybody in the world is bent.
You Might Like This Movie If: You want to see a cocky Brit take on a difficult Italian job.
Really?: 1) So, Professor Peach (the late, great Benny Hill) goes to jail, and nobody cares? 2) I had a hard time believing the Mafia would attempt to chase Charlie and his gang out of Italy after hearing of his plot. Isn’t it far more likely they would demand a cut of the loot? 3) Speaking of the Mafia, it’s funny how they nearly murder Charlie and his accomplices, and then they’re no longer a factor in the story. 4) Bridger forces Charlie to work with one of his henchmen, and they clearly dislike each other, yet that subplot never really goes anywhere. 5) Wait, why do our heroes insist upon driving the three Mini Coopers into a large truck when all four vehicles are hauling ass to Swiss border? They're on a deserted stretch of road - why not pull over?
Rating: The Italian Job is a silly, yet funny and extremely entertaining late 1960s caper comedy that works well as long as you don’t ask too many questions about the plot (see: “Really?”). I'm willing to overlook a few plot holes. Caine does a wonderful job as the likeable Charlie, but famed writer Noel Coward is superb as the authoritarian gangster Mr. Bridger. Highly recommended. 9/10 stars.

Posted by Eli Schuster at 6:54 PM No comments: 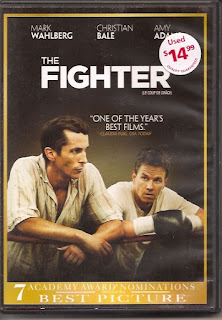 Synopsis: It’s kind of like Rocky…as seen through the lens of The Jerry Springer Show.
Blurb From the DVD Jacket: “…the bond of blood may be their only chance for redemption.”
What Did I Learn?: 1) Belle Epoque doesn’t contain any good sex scenes. 2) It’s not fucking lady-like to be shouting in the street.
You Might Like This Movie If: You know that boxing is a serious business.
Really?: Hmm….. Mickey’s mom is presented as a selfish, uncaring, and borderline-batshit crazy you-know-what for the first two acts of the film, so Mickey’s reconciliation with her feels weird, and more than a little unconvincing.
Rating: The Fighter is a very good, but not-quite-great character-driven drama that starts out well, and loses its way near the end. Christian Bale and Melissa Leo deliver fine performances as Mickey’s crack-addicted older brother, and his delusional mom, respectively, and I liked the interactions between Bale and Wahlberg, but I didn’t buy Mickey’s rapprochement with his mother (which suddenly eliminated her as Mickey and Charlene’s major antagonist). The audience expects Mickey to eventually make a choice between his caring and understanding girlfriend, and his severely dysfunctional family, yet it never comes. 8/10 stars.

Posted by Eli Schuster at 4:09 PM No comments: 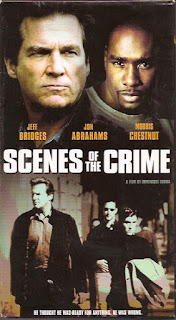 Synopsis: It’s basically two hours of Jeff Bridges getting roughed up in the back of a blue panel van.
Blurb From the VHS Jacket: “He thought he was ready for anything. He was wrong.”
What Did I Learn?: 1) Nothing cures an offence like money. 2) No one gets any guarantees.
You Might Like This Movie If: you know that crime scenes can be rather messy.
Really?: 1) That’s the ending? Pretty lacklustre, if you ask me. 2) Wait a minute…Lenny (Jon Abrahams) is basically just Rick’s driver, and isn’t a criminal, yet he decides to hold Jimmy (Bridges) hostage after Rick gets iced? I had a little trouble believing that turn of events.
Rating: The best thing in Scenes of the Crime is a highly convincing performance from Bridges as a kidnapped white collar criminal. The film is otherwise an ok, but very strangely paced crime thriller that’s marred by an unsympathetic protagonist and an ending that should have been rewritten (see: “Really?”) 6/10 stars

Posted by Eli Schuster at 5:28 PM No comments: