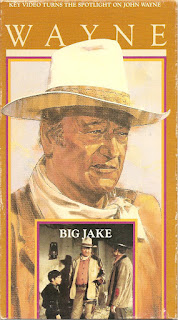 
Blurb From the VHS Jacket: “The last of the old-fashioned gunfighters puts his skills back in action when his eight-year-old grandson is kidnapped by a ruthless band of killers... BIG JAKE sparkles with brilliant performances and classic Western action, enlivened with some unexpectedly entertaining twists. BIG JAKE is the Duke at the peak of greatness.”


What Did I Learn?: 1) John Wayne owns the world’s smartest dog. 2) It really doesn’t pay to be a friend of the McCandles family.


You Might Like This Movie If: You’ve always wanted to be best *ahem* Buds with the Duke.


Really?: 1) John Wayne wears a pink shirt throughout this movie. 2) Couldn’t Wayne’s character think of a better way to create a distraction than to pick a fight with an indestructible he-man? 3) Did anyone at the movie studio think there might have been something disturbing about John Wayne disciplining his mouthy brats with a few right fists? I guess it isn’t child abuse if the victims are in their twenties.


Rating: It’s a little strange to see motorcycles and automatic weapons in a Western (the film is set in 1909), but Big Jake is a thoroughly entertaining example of the genre. Wayne is Wayne, but Richard Boone is amazing as the completely amoral leader of the cutthroats, and the dialog between the two is memorable. Lots of action and suspense, but the film is marred, however, by pretty awful performances by Christopher Mitchum (star of the totally-shitty American Commandos) and real-life son Patrick. 8/10 stars.