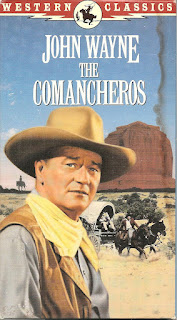 
Synopsis:  If you’ve ever wanted to watch Sonny Crockett and Ricardo Tubbs go undercover in Texas, circa 1843, this is your movie.


Blurb From the VHS Jacket: “John Wayne is Jake Cutter, a Texas Ranger determined to crush a powerful outlaw gang that’s selling guns to the Indians. Cutter is also trying to bring in gambler Paul Regret (Whitman) who’s wanted for murder. Both missions get entangled when Cutter crosses paths with Regret unexpectedly, and the men form an unlikely friendship while Regret decides which side of the law he’s really on.”


What Did I Learn?: The Duke just didn’t look right wearing a top hat.


You Might Like This Movie If: You’re a big Stuart Whitman fan, and you want to watch the film that sent his career into the stratosphere towards bigger, and better movies like, um...Blazing Magnum and Vultures. (Warning: violence in the second clip)


Really?: 1A) So wait...after escaping from Cutter’s custody, Regret just happens to be playing poker at the right table, in the right saloon in the right town just as Cutter joins in? B) And the mysterious woman on the riverboat just happens to be the daughter of the outlaw gang? Those are mighty big coinkydinks, pilgrim. 2A) Amazingly, Regret doesn’t feel the need to inform his poker pals that the newcomer to their game is an undercover Texas Ranger. B) This mysterious woman is so obsessed with Regret that she helps him and Cutter escape from her Dad’s band of cutthroats. 3) Even if you owed a debt of gratitude to the man who helped save your family, would you really name your first-born son “Regret”? How about Paul?


Rating: The Comancheros is a bit cheesy and implausible in places, but Wayne and Whitman work well together, and it’s a fun Western as long as you put your brain on "Pause" and enjoy. 7/10 stars.