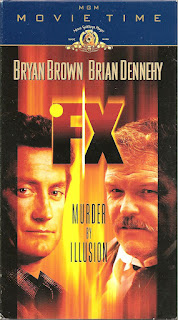 Synopsis: It’s like a two-hour version of MacGyver…except there’s female nudity, and the hero finds ingenious ways to kill people.


What Did I Learn?: If somebody asks you to pull the trigger in a fake assassination plot, um…tell them you’re a little busy that day.


You Might Like This Movie If: You know that acting and special effects are simply two sides of the same coin when it comes to movie-making.


Rating: F/X is an exciting mid-1980s suspense thriller. A movie special effects guy is hired by bad cops to stage a fake murder, and he must then use his tricks-of-the-trade to survive after things go very wrong. The film is lots of fun (as long as you don’t take the plot, or Leo’s police investigation too seriously), although I found it a bit disturbing that Rollie Tyler (Brown) basically becomes an amoral, stone-faced killer by the end. 7.5/10 stars.