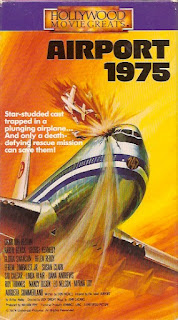 Charlton Heston / George Kennedy Movie #2 (Please click the links to read my reviews of Airport, Airport 1977, and The Concorde - Airport 1979)
Synopsis: It’s essentially Airplane! without the laughs.
Blurb From the VHS Jacket: “A catastrophic mid-air collision threatens the lives of all aboard a 747 jumbo jet in this thrilling drama featuring Hollywood’s biggest stars!”
What Did I Learn?: If you’re ever in a situation where a stewardess is forced to take the controls of a jumbo jet, it’s not a good idea to inform the passengers of this development.
You Might Like This Movie If: You'll watch anything from the mid-1970s.
Really?: Call me a skeptic, but I’m pretty sure that if a small airplane crashed right into the cockpit of a 747 jumbo jet, the latter aircraft probably wouldn’t stay aloft very long afterwards.
Rating: Airport 1975 is probably the best of the Airport films (although that's a bit like calling somebody the valedictorian of summer school!), as it features a semi-believable plot, an interesting cast , and some nice chemistry between Heston, Kennedy and Karen Black. Check it out if you want to look at some of the source material that inspired the creators of Airplane! 7/10 stars.

Posted by Eli Schuster at 4:47 PM No comments: 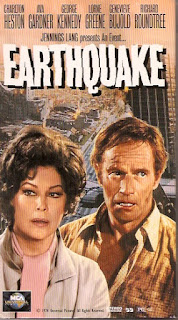 Charlton Heston / George Kennedy Movie #1 (Please click the links to read my reviews of a few other 1970s disaster films: The Towering Inferno, The Poseidon Adventure, and The Swarm).
Synopsis: It’s like the Towering Inferno,except… horizontal.
Blurb From the VHS Jacket: “When the most catastrophic earthquake of all time rips through Southern California, it levels Los Angeles and sends shockwaves through the lives of all who live there.”
What Did I Learn?: 1) Earthquakes bring out the worst in some people. 2) A satyr is a male version of a nympho. 3) When George Kennedy yells: “move your ass!,” you Move. Your. Ass. 3) People do NOT drown in elevators every damn day of the week.
You Might Like This Movie If: You’re a die-hard Lorne Greene fan.
Really?: 1) Speaking of Lorne Greene, I honestly never thought I’d hear him shout: “take off your pantyhose, damnit! You too, c'mon, take off your pantyhose!” 2) So, why is Walter Matthau dressed like a 1970s pimp?
Rating: Earthquake might be the quintessential 1970s disaster movie: overly long, highly  melodramatic, and stuffed with unusual cameo appearances (see: “Really?”). It’s also a lot of fun, if you don’t mind a bit of over-acting. 6.5/10 stars.

Posted by Eli Schuster at 7:12 PM No comments: 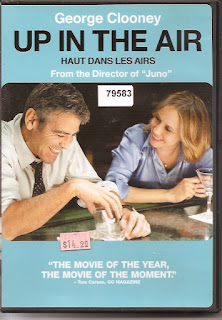 Synopsis: High-flying douchebag gets grounded.
Blurb From the DVD Jacket: “Ryan Bingham is truly living the high life. Flying all over the world on business, he never stops moving… until he meets Alex, a fellow passenger, and learns that life isn’t about the journey, but the connections we make along the way.”
What Did I Learn?: 1) Kids love athletes because they follow their dreams. (Adults love athletes because they bang lingerie models). 2) If somebody asks: “am I getting fired?”, the words: “Perhaps you're overlooking the positive effects your career transition will have on your children”, “We're here to talk about your future”, and “This is the first step in a new process that will end with you at a job that fulfills you” aren't going to cut it.
You Might Like This Movie If: You love being in the air.
Really?: I had a bit of trouble with the entire concept of this film. Doesn’t every large company have its own Human Resources department that’s perfectly capable of firing employees? Why would anyone pay a hefty fee so Ryan can fly cross-country, fire a mid-level executive or two and then take off the next day?
Rating: Up in the Air is an enjoyable film that works better as satire on corporate downsizing and the emergence of parasitic Human Resources consulting firms than it does as a romantic comedy, in part because Ryan and Alex are both rather selfish and shallow individuals. In my opinion, the best scenes involve Ryan showing Natalie (Anna Kendrick) the ropes, and attempting to explain why firing employees via videoconferencing is really, really tacky. 8/10 stars.

Posted by Eli Schuster at 5:47 PM No comments: 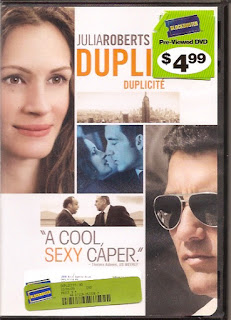 Yup - Blockbuster wanted $5 for this flick.
Synopsis: Devious duo ditch dull data-delivery duties, devise dexterous deceit.
Blurb From the DVD Jacket: “Oscar winner Julia Roberts and Clive Owen star as two sexy spies-turned corporate operatives in the midst of a clandestine love affair.”
What Did I Learn?: 1) There’s a lot of money in frozen pizza. 2) Writing with a fountain pen is rather pretentious. 3) “Lotion” cannot be used interchangeably with “cream.”
You Might Like This Movie If: You know that a cure for baldness could put a lot of people out of business.
Really?: 1) So, wait - the Swiss buyers take a good look at the stolen formula and realize almost instantly that it’s just a cold cream. Wouldn’t Garsik (Paul Giamatti) have his experts examine the formula before making a huge announcement at the company AGM? 2) Ray (Owen) and Claire (Roberts) meet what - five or six times in exotic locales (ok, Cleveland isn’t all that exotic) just so they can talk about pulling a big scam? Are any of these scenes actually necessary for advancing the plot?
Rating: Duplicity isn’t bad for an evening’s entertainment, but it doesn’t quite work as either a romantic comedy or as a suspenseful spy thriller. The film suffers from a few problems, including a highly contrived and difficult-to-follow story, a noticeable lack of chemistry between the two leads, and an endless parade of pointless flashbacks (see: “Really?”). Check it out only if there’s nothing better on the tube. 6/10 stars.

Posted by Eli Schuster at 7:33 PM No comments: 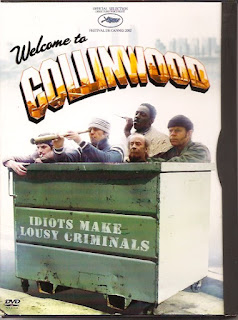 Let’s Rob a Jewelry Store Movie #2
Synopsis: George Clooney leads an all-star crew of loveable thieves as they plan-and-execute a heist. So, let’s call it a very low-rent Ocean’s 11.
Blurb From the DVD Jacket: “it’s the easiest heist plan, the cleanest getaway, the biggest payday. It’s the kind of sure thing folks in blue-collar Collinwood call a Bellini, so what could go wrong? In a word, everything!”
What Did I Learn?: Bellinis are good….Kapuchniks are bad.
You Might Like This Movie If: You figure it must be an 86-minute travelogue video...and you didn't notice the missing "g".
Really?: 1) I had a hard time believing Pero (Sam Rockwell) would use every dime of Cosimo’s $16,000 to bribe the cop. How does he know the robbery would even be assigned to him? 2) Speaking of which, let’s see…. two old ladies move into the long-vacant apartment next to the shop, and the gang suddenly has a hard-ass cop breathing down their necks. I realize these guys aren’t the sharpest tools in the shed, but most people would dismiss the job as unworkable and simply move on.
Rating: If Welcome to Collinwood seems eerily familiar, it’s because the film is a remake of the 1958 Italian classic, Big Deal on Madonna Street, which was also remade in the 1980s as Crackers, starring Donald Sutherland and Sean Penn. That said, Collinwood is a clever, compelling, and very funny re-telling of the original (I couldn't stop myself from laughing hysterically when Michael Jeter's Toto somehow loses his underwear during the robbery). 8/10 stars.

Posted by Eli Schuster at 6:33 PM No comments: