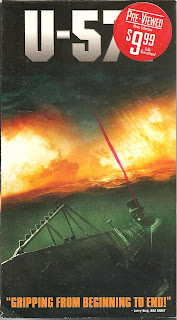 Synopsis: If you firmly believe the United States won the Second World War all by itself, this is your movie.

Blurb From the VHS Jacket: “A US Navy Captain and his crew are just beginning to enjoy 48 hours of leave when they receive word to immediately return to duty. On a top-secret assignment, they must disguise themselves as Nazis and infiltrate a severely damaged Nazi U-boat.”

What Did I Learn?: Leadership is the ability to send one of your men to a gruesome death without a moment’s hesitation or remorse.

You Might Like This Movie If: A certain song has a special place in your heart.
Really?: 1) So wait... the US Navy has to make one of their subs look like a U-Boat, it leaves a naval harbour in Maine, and it somehow beats the actual rescue sub to the damaged U-Boat? How is that possible? 2) And when the real rescue sub arrives on the scene, it immediately destroys the US sub, even though it’s made to look like a U-Boat and there’s a heavy storm in progress? Wouldn’t the rescue sub send a message, or attempt to figure out what’s going on? 3) Ok, so the U-Boat was badly damaged even before the Americans take it over, it gets the shit knocked out of it from the Destroyer’s depth charges, and the Yanks somehow manage to fire off one last torpedo and save the day? Give me a break... 4) Gee... I always believed the Brits grabbed the Enigma machine. [Thanks to an outcry in Britain, the filmmakers added a special note at the end of the movie which explains that yes, the British were in fact mostly responsible for breaking the Enigma codes.]

Rating: U-571 is historically-inaccurate, and mindless American jingoism. While the film provides some exciting thrills and first-rate special effects, the storyline has a number of glaring holes (see “Really?”),  the dialogue is terrible, and the characters are all one- or two-dimensional. It's amazing that Jonathan Mostow could recruit some genuinely talented actors (Bill Paxton, Matthew McConaughey and Harvey Keitel) and then then give them little to do. I cannot recommend this movie. 3/10 stars.