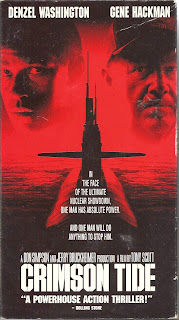 With Remembrance Day right around the corner, I figured I would review a few films that deal with military submarines.

Blurb From the VHS Jacket: “In the face of the ultimate nuclear showdown, one man has absolute power. And one man will do anything to stop him.”

What Did I Learn?: Cigars are more expensive than drugs, you don’t put on a condom unless you intend to fuck, and horses are highly intuitive but dumb as fence posts.

You Might Like This Movie If: You enjoy watching military enemies put aside their differences... as well as anything with the word "Crimson" in the title.


Really?: 1) Gee...considering these guys have the power to unleash a nuclear holocaust, you might expect them to bring a spare radio on board just to prevent any misunderstandings from occurring! [According to the “Goofs” section of the imdb.com write-up of this film, submarines do in fact bring several radios along when they go to sea – in other words, the entire premise of the film is a bit difficult to believe]. 2) So wait... the Alabama’s officers actually take up arms against each other, stage a mutiny and counter-mutiny, and then all is forgiven right at the end? Um... bullshit.

Rating: Much like Mr. Roberts and The Caine Mutiny, Crimson Tide deals with escalating tensions between a captain and his second-in-command aboard a US Navy vessel. The film starts out well (although the time-wasting geopolitical backstory could have been eliminated by simply setting the story about 12 years in the past) and it works best when it focuses on the growing rift between Hunter (Denzel Washington Jr.) and Capt. Ramsey (Gene Hackman). After a good buildup, however, Hackman turns into a snarling lunatic, while Washington becomes an irritating, self-assured know-it-all, and the story descends into a lot of plot-driven cat-and-mouse skulking around the sub and shouting matches between the two leads. Then again, what else should I have expected from Don Simpson, Jerry Bruckheimer and Tony Scott? 6/10 stars.