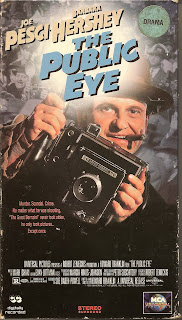 Blurb From the VHS Jacket: “Academy Award winner Joe Pesci is a brash, 1940’s tabloid photographer whose camera leads him into a shadowy underworld of mob violence, unlikely romance and dangerous corruption in this atmospheric mystery-thriller.”

What Did I Learn?: “Everybody loves to have their picture took. Everybody.”

You Might Like This Movie If: You know that taking pictures of hot-headed celebrities isn't an easy job.
Really?: 1) See “Synopsis”. 2) See “What Did I Learn?” 3) So, instead of attempting to prevent the big mob hit, Bernzy wants to photograph it? I realize he’s doing his job, but that doesn't seem terribly noble...

Rating: Joe Pesci delivers a tour-de-force performance as “Bernzy,” a kinda-sleazy-but-mostly-decent shutterbug who finds himself dodging bullets and romancing a woman (a very sexy Barbara Hershey) far out of his league. The Public Eye is an enjoyable film noir thriller, and highly recommended. 8.5/10 stars.