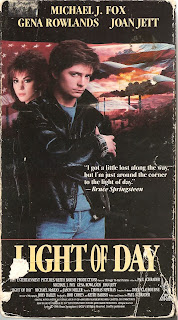 Synopsis: Michael J. Fox rocks out, and if he can’t make his parents kiss at the Under-the-Sea dance, he’ll never... oops, wrong movie!
Blurb From the VHS Jacket: “Music is the only escape for siblings Joe and Patti Rasnick – in Patti’s words, ‘One hour on stage makes up for the other 23.’ MICHAEL J. FOX is Joe, devoted bother, blue-collar worker and guitarist for The Barbusters, an undiscovered local rock band featuring him and his sister Patti.”

What Did I Learn?: 1) The best strategy for stealing meat from a grocery store is to stick it down your pants. Better still, stick a package of frozen steaks down your 4-year old son’s pants. 2) According to a sign on a chain link fence next to the factory, “Performance is a Reflection of Attitude.” 3) Cleveland is a seriously ugly city.

You Might Like This Movie If: You enjoy watching both a good temper tantrum, and a bar getting busted.
Really?: 1) Wow... Joan Jett really doesn’t perform her “A” material in this movie, does she? 2) Nobody personifies a rock music-loving, working class Joe quite like Michael J. Fox.

Rating: While I generally like Paul Schrader’s films, he really dropped the ball with Light of Day, a nearly-forgotten late-1980s rock-and-roll drama featuring an unlikeable Joan Jett (her acting range apparently stretched from sullen and pouty to self-righteous anger), and Michael J. Fox, who was just plain wrong for his part. (Incidentally, I felt the same way about his performance in Casualties of War). Oh, and the story goes nowhere, and by the end, I really didn’t give a shit. I cannot recommend this movie. 4/10 stars.

Would It Work For a Bad Movie Night?: Absolutely – take a drink every time every time Patti blows up; take another every time Joe gets judgmental.