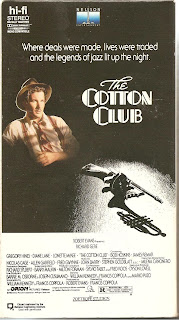 Hey – this would have worked for my Nicolas Cage film fest!

Blurb From the VHS Jacket: “Richard Gere is Dixie Dwyer. In his powerful hands a trumpet became more than a horn. And a girl became more than a woman. He was the only man who could walk the violent line between music and the mob.”

What Did I Learn?: If a gangster tells you that he was found as a baby in a garbage pail, and that he doesn’t have a mom, there’s a very good chance he won’t be a terribly sensitive soul.

You Might Like This Movie If: You firmly believe Gregory Hines wore tap shoes everywhere he went.
Really?: 1) You know, if I had the fame and charisma to bang nearly any chick I wanted in New York City, I don’t think I’d play footsie with the mistress of the city’s biggest gangster. 2) Gee...if Dutch Schultz really wanted to bump off Flynn, wouldn’t it have been much smarter to smile, shake his hand and then do the deep later on, rather than killing him with his bare hands at a heavily-attended party that’s supposed to be a truce? 3) See "You Might Like This Movie If" - although it is an awesome scene.

Rating: I wanted to like The Cotton Club more than I did. The movie is jam-packed with stars, the musical numbers are top-notch, and there are many great performances and memorable moments. Alas, the film doesn't amount to more than the sum of its parts, and the Richard Gere/Diane Lane storyline never really intersects with the Gregory Hines/Lonette McKee sub-plot. There's a lot of cool stuff, but it's a long movie and it really tends to drag. The Cotton Club is good, but not great. 7/10 stars.