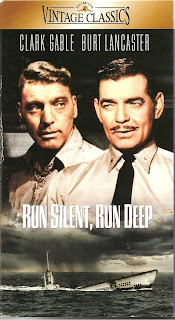 Synopsis: Grizzled submarine captain tangles with younger, by-the-book Executive Officer during a dangerous mission in the Pacific... hey, wait a minute....this is Crimson Tide in black and white!

Blurb From the VHS Jacket: “’Rich’ Richardson (Clark Gable) is a hard-driving, dedicated submarine officer with one single-minded purpose – to seek out and smash the Japanese destroyer he believes sunk his former ship.”

What Did I Learn?: Apparently, gin mixes well with lemonade.

You Might Like This Movie If: You figure it must be a 93-minute music video for Iron Maiden... or Shakespear's Sister?
Really?: 1) Kinda lucky how Commander Richardson gets banged up, and winds up in the sick bay around the time the other officers are thinking about a mutiny, isn’t it? 2) So... the crew likes going into combat? They seriously feel guilty, or disappointed about returning to Pearl Harbor with 15 unused torpedoes?

Rating: Run Silent, Run Deep was one of Clark Gable’s last movies, and it’s a pleasure to watch him butt heads with a somewhat younger Burt Lancaster. While the Japanese are the enemy, the movie is mostly character-driven, and it focuses on the growing tensions between a by-the-book Executive Officer and his increasingly erratic boss. My only complaint would be that Gable’s character is taken out of the action a bit too easily, and when he’s confined to the sick bay the film loses some dramatic tension. Oh – look for Don Rickles and Jack Warden in supporting roles. 8/10 stars.