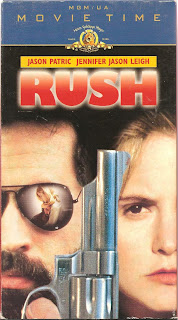 Blurb From the VHS Jacket: “What happens when two cops stop loving their job... and start living it?”

What Did I Learn?: 1) Apparently, rural, 1970s Texas was a cesspool of drugs and criminal scumbags. 2) You cook heroin but not cocaine, and you *can* cook speed, but not that many people do.

You Might Like This Movie If: You assume, based on the title and subject matter, that it must be a biography of this guy.


Really?: 1) Considering Kristen might want a reference from her former employer, and probably doesn’t want to face perjury charges, I had a hard time believing she would deliberately ruin the case against Gaines on the witness stand. 2) So wait... Walker makes a good point. Jim and Kristen don’t have jobs, yet they always have lots of money, they insist upon buying drugs from every dealer in town, and all of those scumbags mysteriously wind up getting arrested. Just how long were they supposed to stay undercover?

Rating: Rush is an outstanding look at the pressures of undercover police work and the dangers of creeping drug addiction. The film is character-driven, so we see a lot of Jim and Kristen confronting their demons, and very little cop movie-style "action." It mostly works, but that approach has its limitations; Will Gaines, the biggest drug dealer in town, and the main villain in the movie has what – four or five lines of dialogue, and he’s onscreen for maybe 20 minutes? 8.5/10 stars.