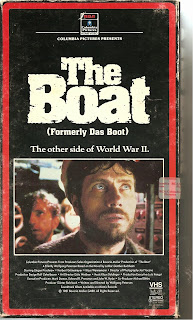 Blurb From the VHS Jacket: “The most expensive, most successful motion picture in the history of German cinema, this gripping tale follows the daring patrol of U-96, one of the famed German U-boats known as the ‘gray wolves.’”

What Did I Learn?: German naval officers acted like assholes when they enjoyed shore leave in France.

You Might Like This Movie If: You love anything with the word "Das" in the title.
Really?: For the most part, The Boat/Das Boot seems incredibly realistic, right down to the ubiquitous filth of the crew compartments, and a crew member flicking boogers(!) at his fellow shipmate. Still, couldn’t the inspection for “crabs” have been done on-shore, prior to boarding? Oh, and I have to wonder: just how many WWII-era German naval officers – even falling-down drunk – would really offer a sarcasm-dripping toast to Hitler in a room filled with young officers?

Rating: Clocking in at two-and-a-half hours The Boat/Das Boot is a long movie (and this is the short version!), but it never feels like one. By far, Das Boot is the most realistic of the submarine films I’ve reviewed, and it provides the best idea of what life must have been like in one of those narrow tin cans: the claustrophobia, the soul-destroying boredom, and the sheer terror of a depth-charge attack. Highly recommended. 10/10 stars.