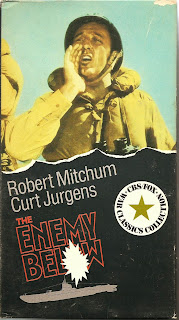 Blurb From the VHS Jacket: “Robert Mitchum and Curt Jurgens star in this excellent drama about two ship captains stalking each other at sea. When an American destroyer detects a German U-boat prowling beneath the surface, its captain (MItchum) immediately pursues the enemy. The sub’s commander (Jurgens) is a wily veteran who uses ingenious evasive tactics while angling for position to torpedo the destroyer.”

What Did I Learn?:  Managers, if you feel your employees / direct reports are feeling a bit down in the dumps, put an LP of German beer-drinking songs on the old turntable and lead them in a sing-a-long!


Really?: 1) See “What Did I Learn?” (I realize Captain Von Stolberg takes this action because his crew is about ready to crack after the steady bombardment, but I’m not sure how many sub captains would actually do that). 2) You know... if Von Stolberg had veered away from course 1-4-0 – even for a few hours – none of this ever would have happened.

Rating: Aided by strong performances from both Mitchum and Jurgens, The Enemy Below is an excellent Second World War picture that works as both an anti-war character-driven drama and a gripping suspense thriller. Frankly, I was expecting jingoistic trash along the lines of U-571; instead, Director Dick Powell presents both crews sympathetically (Von Stolberg doesn’t think much of Hitler, but he has a job to do, and he does it the best way he can to keep his crew alive) with real hopes and fears. Oh - and the ending was a complete surprise - I like that. Highly recommended. 10/10 stars.