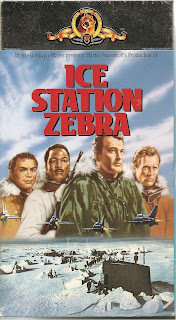 Submarine Movie #4 (Ok, a lot of this flick takes place on the Arctic ice cap, but it still counts as a military submarine movie)

Synopsis: It’s like the second half of The Hunt for Red October combined with the first half-hour of The Empire Strikes Back.

Blurb From the VHS Jacket: “Treacherously perched at the top of the world, Ice Station Zebra silently guards a secret that will change the balance of power forever. America’s only hope rests with the speed and courage of the fighting men in the nuclear sub ‘Tigerfish.’ Pray they get there before the Russians.”

What Did I Learn?: 1) If you’re looking for a traitor/villain in your midst, start with the funny-looking fellow with a thick, European accent (Oh wait – I learned that from countless episodes of Scooby Doo!) 2) It’s always the black guy who gets killed first... hey wait a minute – this movie is chock full of clichés!

You Might Like This Movie If: You really want to see the film that inspired this, this and this.


Really?: So, um...why don’t the Soviets send a submarine to the crash site, if it’s the fastest (and only) means of getting there quickly?

Rating: Based on an Alistair MacLean novel, Ice Station Zebra is an enjoyable (albeit not terribly believable) Cold War adventure that’s more spy story than submarine film. It’s fun to watch Rock Hudson, Ernest Borgnine (his Russian accent is atrocious, by the way), Patrick McGoohan and Jim Brown play off each other, but the film really starts to drag in the second half for a simple reason: at two hours and 30 minutes (there’s actually an intermission!) – Ice Station Zebra is just a bit too long for my taste. 7/10 stars.