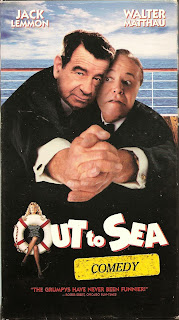 Synopsis: It’s Felix and Oscar on the Love Boat, dancing badly with Barney Miller, Mr. Data, and Blanche from The Golden Girls.

Really?:  1) You know – I’m pretty sure racetrack employees won’t “cover” you “just this one time” if you don’t have the cash to pay for your bet. 2) Wow... it’s amazing how Charlie (Matthau) can fake an injury and essentially fuck off from his job for what – nearly the entire movie? 3) I’m about 99% certain that if my brother-in-law tricked me into working on a cruise ship under false pretences, I would promptly: a) not go along with the charade, b) fly home at the ship’s first port of call, and c) never speak to the slippery bastard again.

Rating: Out to Sea is an ok, but not great screwball comedy. The plot is incredibly contrived and the laughs are quite sporadic. That said, Matthau exudes a likeable roguish charm, and Brent Spiner does a fantastic job of portraying the slimy Gil Godwin. Out to Sea has a remarkable cast (including Donald O’Connor!), and it does have its moments of goofy hilarity. Check it out if you're in the mood for some light-but-forgettable fun. 6/10 stars.