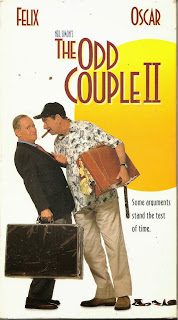 Synopsis: Ever wanted to see Felix and Oscar reunite 30 years later, trek across the American Southwest and run afoul of bikers, exploding cars, crop-dusters, and short-fused law enforcement officials? Um... me neither.

Blurb From the VHS Jacket: “It’s a comedy celebration as Jack Lemmon and Walter Matthau reunite to reprise their roles as Felix and Oscar in Neil Simon’s The Odd Couple II.”

What Did I Learn?: Reading and peeing are two entirely different things.

You Might Like This Movie If: You really want to see Felix and Oscar fight each other in the late 1990s.
Really?: 1) So wait – Felix punches the car, which somehow causes it to roll backwards into a ditch and burst into flames? Gee.. the rental car doesn’t appear to be on a slope, and did Oscar somehow leave it in “Neutral” when he parked? It’s a nice sight gag, but the scene makes no sense. 2) I realize Herb Edelman (best remembered as Dorothy’s no-good husband Stan on The Golden Girls) was dead by the time this movie was made, but couldn’t Neil Simon have found a way to either include, or tell us what happened to Vinnie, Roy, Speed and Murray the cop from the first movie? 3) I had a bit of trouble believing LeRoy and JayJay would: a) hijack a bus, and b) take Felix and Oscar as hostages simply because they danced with their wives the previous evening. 4) Hold on - the boys reunite because Felix's daughter is getting married? This sounds suspiciously like the 1993 made for TV movie!

Rating: The Odd Couple II isn’t quite a bad movie, but it’s a big disappointment as a sequel to the 1968 classic. While the original was essentially an adaptation of Neil Simon’s stage play (right down to not showing the fourth wall of Oscar’s apartment), OCII – also written by Simon - is entirely plot-driven, and the plot is incredibly contrived, and not terribly funny most of the time. I guess you can't keep lightning in a jar, and open it three decades later. 6/10 stars.