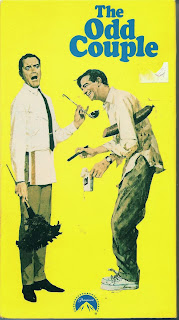 Blurb From the VHS Jacket: “Neil Simon has a special genius for finding the great hilarity in ordinary people doing everyday things. Like two divorced men who decide to share a New York apartment.”

What Did I Learn?: When a plate of linguine is thrown against a wall, it instantly becomes “garbage.”

Really?: 1) Wow... it certainly takes Oscar a long time to fix those drinks, doesn’t it? 2) So... Felix couldn’t have simply taken that meatloaf out of the oven, and served it at room temperature instead of burning it to a crisp? Come on...

Rating: As you can tell from my other reviews, I’m not a big Neil Simon fan, but wow – The Odd Couple is a funny, cleverly-written, and all-too believable comedy featuring Lemmon an d Matthau at the top of their game (although I must admit that I’ll always think of Tony Randall and Jack Klugman as Felix and Oscar). I enjoyed this film, but my only complaint is that Simon’s script never grows beyond light comedy; there are no touching dramatic moments between Felix and Oscar such as those John Hughes created for Steve Martin and John Candy in Planes,Trains and Automobiles, and neither man really learns anything about himself, or why their marriages failed (although Oscar half-heartedly asks his guests not to make too much of a mess at the end). Still, highly recommended. 9/10 stars.