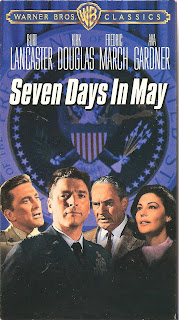 Synopsis: Dashing Marine officer foils military takeover of America by, um... drinking a lot of martinis, snitching on his boss, romancing the General's ex-mistress and stealing a pile of steamy love letters? Creepy!

Blurb From the VHS Jacket: “It happens with startling swiftness and violence. An armed cadre seizes state control. Fortunately, a coup d’etat can’t happen here. Or can it?”

What Did I Learn?: “You can't gear a country's economy for war for 20 years, then suddenly slam on the brakes and expect the whole transition to go like grease through a goose.”

You Might Like This Movie If: You work in a high-tech job, your boss is Burt Lancaster, and you know you shouldn't attempt to hide anything from him!
Really?: 1) Hold on – the President suspects there’s a secret military base somewhere outside of El Paso, and he sends a United States Senator from Georgia (and a drunk, to boot!) to single-handedly play Private Eye? 2) The coup would make a lot of sense if the plotters were to assassinate the President, thereby promoting the Vice President, but the plan is to apparently put a charismatic Air Force General in the Oval Office. Um...  how would America’s allies react? Would there be riots and protests in the streets? Funny how everyone assumes that American conservatives would basically go along with a blatantly obvious subversion of American democracy.

Rating: Written by Rod Serling (best remembered for the Twilight Zone) and directed by John Frankenheimer, Seven Days in May is an interesting period film from the early 1960s - a time when the opinions of many American liberals towards conservatives were informed by Richard Hofstadter's The Paranoid Style in American Politics. Lancaster, Douglas and March are all quite good, and the final confrontation between Gen. Scott and President Lyman is memorable. Still, after a great opening, the film tends to drag in the second half; Jiggs (Douglas) never appears to be in any danger (he even disappears for about 30 minutes!), the scenes between Jiggs and Ellie (Ava Gardner) seem tacked-on and pointless, and the coup plotters don’t get a sense the President is on to them until the very end. For a film about an impending military takeover of America, Seven Days in May lacks some necessary dramatic tension. 6.5/10 stars.