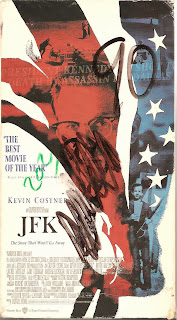 JFK Assassination Movie #3 (Yes, some idiot marked up the VHS jacket with a magic marker)

Lemmon/Matthau Movie #1 (They’re both in this film, although they don’t have any scenes together)

Blurb From the VHS Jacket: “’I hope people everywhere will see this movie and make up their own minds. JFK is our alternative myth to the Warren Commission myth, an opportunity for people to rethink history. I hope they become more aware of how politics are played out and how kings are killed. And I hope the film inspires them to be politically active, determined to shape a better future, to improve upon the past. These are my fondest wishes. – OLIVER STONE, DIRECTOR OF JFK.”

What Did I Learn?: 1) Somehow, America’s 35th President was murdered by both the military-industrial complex AND an ultra-right-wing gay cabal in New Orleans. 2) The organizing principle for any society is war.

You Might Like This Movie If: You know this is all a work of fiction, and nothing like this could ever happen in real life. Nope.


Really?: Considering this film is based entirely on a conspiracy theory, I could go a bit nuts in this section. I will say that according to Willie O’Keefe’s version of events, the entire thing was plotted out (including the need for a patsy) right in front of Oswald at a party in New Orleans in the summer of 1963. That seems kind of unlikely. Oh – and the proposed motive for the hit: that Kennedy wanted to take American troops out of Vietnam, sounds like bullshit from everything I’ve read about the man.

Rating: I have very mixed feelings about Oliver Stone’s JFK. On the one hand, it’s an extremely compelling presentation of the JFK assassination conspiracy theory, and Kevin Costner does a masterful job near the end of the film when he outlines the details of it in his summation to the jury. Leaving aside the questionable alternative history presented in JFK, the film has some problems, however. The script is frequently awful – real people just don’t sound the way Stone writes dialogue, John Candy looks like he stepped out of an SCTV sketch, and the recurring pattern – Garrison becomes engrossed in his work, forgets a play date with his kids, and then gets yelled at by his long-suffering wife – gets tiresome fast. 6.5/10 stars.