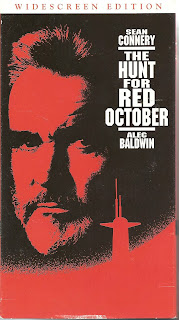 Submarine Movie #2 (Hmm... considering this movie takes place in 1984, I could have used The Hunt For Red October in my salute to Sean Connery Historical Fiction films)

Blurb From the VHS Jacket: “Based on Tom Clancy’s bestseller, directed by John McTiernan (Die Hard) and starring Sean Connery and Alec Baldwin, The Hunt for Red October seethes with high-tech excitement and sweats with the tension of men who hold Doomsday in their hands.”

What Did I Learn?:  Russians don’t even take their dumps without a plan.

You Might Like This Movie If: You enjoy nostalgia...and submarines.
Really?: 1) So wait... I’m guessing Ramius (Connery) planned this defection months in advance, and his plan for eliminating the Political Officer was to break his neck and then claim he slipped on some spilled tea? 2) I realize Ramius sent that letter to the KGB in order to prevent his crew from changing their minds, but gee... alerting the entire Soviet Navy seems incredibly stupid. Couldn’t he have arranged for it to be delivered at a later date, or something? 3) Was it really necessary to include those electronic beeps every time the movie switches scenes with a green-text subtitled dateline? 4) Ok, so the cook’s assistant is a KGB/GRU agent... how does he know there’s a conspiracy on the sub, and how did he get his orders to sabotage it?

Rating: I’m not a big Tom Clancy fan, but The Hunt for Red October isn’t a bad film, thanks to some nice pacing and direction provided by McTiernan. Connery, Baldwin, and Glenn work well together, and the movie offers a number of memorable moments (my favourite would be the Russian and American officers co-piloting Red October to ward off a Soviet sub attack); my only complaints (aside from those already mentioned in the “Really?” section) would be that it takes a LONG time for things to get cooking, and there are a few too many scenes of Jack Ryan getting escorted from ship-to-ship-to-ship. 7/10 stars.