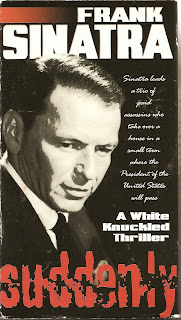 JFK Assassination Movie #1 (I wanted to include reviews of two other JFK assassination films – Interview With the Assassin, and Executive Action, but I couldn’t get my hands on them. They will have to wait for another time).

Synopsis: It’s 80 minutes of Old Blue Eyes out-acting a bunch of idiots who keep telling him: “you’ll never get away with it!”

Blurb From the VHS Jacket: “Reportedly, this movie was viewed by Lee Harvey Oswald shortly before the assassination of President John F. Kennedy. For this reason, Frank Sinatra withdrew this movie from circulation.” [According to imdb.com, this is actually a myth – Sinatra didn’t have the authority to block the film’s distribution.]

What Did I Learn?: The best way to a woman’s heart is to repeatedly tell her she’s a crappy mom for not letting her little boy play with toy guns.

You Might Like This Movie If: You know you never want to get on Frank Sinatra's bad side.
Really?: 1) Nothing clears the mind quite like having a gun pointed towards it. If a bunch of gangster asked me if anyone was coming over to the house, I’m pretty sure I would remember to mention the TV repair guy. 2) Similar to point #1 – if my home is ever taken hostages by mob assassins, and they tell me to shut up, I don’t think I’ll spend the afternoon throwing insults at them.

Rating: I wanted to like Suddenly, but the script is hackneyed, clichéd, and terribly written. The talented Sterling Hayden is reduced to a bellowing loudmouth, and I found myself seriously wanting to see the gangsters bump off their hostages in the house. I can’t recommend this movie, but its one saving grace is Sinatra – his performance is electrifying. Clearly, he could act when he wanted to do so. 4/10 stars.

Would It Work For a Bad Movie Night: Probably not. Take a drink any time the gangsters pass up a perfectly good opportunity to whack an unruly hostage. Take two drinks any time a character questions Ellen’s parental skills.