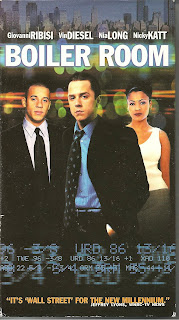 Blurb From the VHS Jacket: “Seth Davis (Giovanni Ribisi, Saving Private Ryan) runs a small-time casino operation out of his apartment. With his streetwise business smarts, he’s recruited to join the city’s newest and hottest stock brokerage firm, an aggressive, renegade corporation far from the traditions of Wall Street.”

What Did I Learn?: Guys, if your new girlfriend keeps saying: “there’s something I really need to tell you”, you might want to give her a minute of your time.

You Might Like This Movie If: You enjoy anything that involves the word "boiler."
Really?: 1) So, hold on... around the mid-point of the movie, Seth discovers the entire brokerage firm is a con job, and yet he continues to sell junk-stocks to his clients without ever once realizing: a) he’s part of a criminal conspiracy and could go to jail, or b) he’s ruining peoples’ lives? What a dick... Seth’s realization should have been re-written for near the end. 2) Considering Seth is suddenly a high-powered, well-dressed stockbroker with plenty of cash from this casino business, why would he get on his boss’ bad side by dating the one woman in New York City Greg doesn’t want him to date?

Rating: While it’s a little difficult at times to sympathize with the protagonist (see: “Really?”), Boiler Room is an enjoyable drama that’s probably even more timely today, after ENRON, Bernie Madoff and the sub-prime mortgage meltdown than when it was released in 2000. The script should have been tightened-up (Ben Affleck’s character probably could have been merged into either Vin Diesel’s or Nicky Katt’s and written-out altogether), but I quite liked the scenes between Seth and his hard-assed father (Ron Rifkin). 7.5/10 stars.