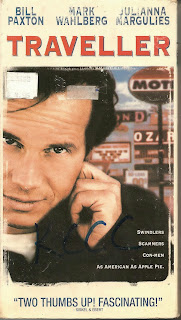 Synopsis: It’s like a rural, low-rent, country-music version of The Sting.

Blurb From the VHS Jacket: “Swindlers Scammers Con-Men As American As Apple Pie”

What Did I Learn?:  When it comes to US currency, “A” is the Federal Reserve Bank Seal for Boston. It doesn’t stand for “America.”

You Might Like This Movie If: You enjoy watching ordinary, working-class Americans getting ripped off.
Really?: 1) I had no idea there’s big money in offering to apply driveway sealant for a discounted price, and then using cheap black paint. For a con, that seems like a lot of work for not a lot of cash, and quite low-rent. 2) Scamming a waitress for every penny she has – gee, that’s cool. 3) So wait – Pat (Mark Wahlberg) really, really, really wants to join the Traveller community, so he needs the boss to like him, and yet he keeps hitting on his daughter even though she’s engaged to be married? I realize he’s young and naive, but wow – that’s incredibly short-sighted and reckless behaviour.

Rating: Traveller is an entertaining film about an insular community of Irish-American con artists somewhere in the South. It’s a good movie when it focuses on Bokky (Bill Paxton) teaching Pat the ropes about running scams (but cheating poor people out of their money? That’s low), but the twin romances strain its credibility, and the uber-violent ending seems a bit out of place. 7/10 stars.