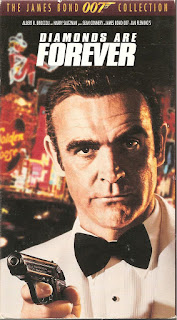 
Synopsis: It's like an Austin Powers movie, except that it's only unintentionally funny.


Blurb From the VHS Jacket: “A gem of a spy-thriller!”


What Did I Learn?: If you've somehow managed to knock out James Bond, don't try to set up an elaborate death trap for when he wakes up... just shoot him in the back of the head.


You Might Like This Movie If: you really want to see the worst entry in the 007 franchise before some genius created the animated series.


Really?: 1) Blofeld in drag...oh dear. 2) So wait - we know that Bond is a tough guy - he beats up a martial arts expert in the first few seconds, yet he has zero offense when he encounters Bambi and Thumper? 3) Hold on - Bond simply shows up at the offshore oil rig, alone and in broad daylight, expecting an opportunity to switch cassette tapes? And why does he even need to do that when it becomes obvious the US Government can simply blow up the platform? 4) Bond never fires his gun...not once. 5) Why is there a mock-up of the moon landing? Is somebody playfully suggesting the entire Neil Armstrong scene was a con job on the American public? 6) Did I miss something...why did the villains need Shady Tree's involvement in the diamond plot? What did he do, exactly? 7) Why would Plenty O'Toole look for Tiffany Case? As far as I could tell, she hooked up with Bond in the casino, and her involvement should have ended after the gangsters threw her into the pool. 8) So, Wint and Kidd leave Bond unconscious in a section of tubing, and the none of the construction workers on duty notice a sleeping man wearing a tuxedo?


Rating: Tacky, campy, low-budget and awful are adjectives I would use to describe Diamonds Are Forever. While the film has a few decent moments, including a great fight scene between Bond and career criminal Peter Franks, this is definitely one of the low points in the 007 franchise, and the explosive finale aboard the oil rig is absolutely atrocious. Interestingly, Sean Connery looks significantly older than he did in You Only Live Twice, and you can tell he did Diamonds strictly for the paycheque. I cannot recommend this movie. 3.5/10 stars.

Would it Work for a Bad Movie Night?: Take a drink any time you discover a plot hole.