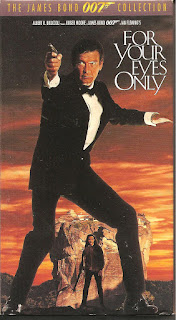 
Synopsis: It's the sequel to Moonraker and The Spy Who Loved Me, except there aren't any: laser gun fights, invisible space stations, underwater fortresses, cars that turn into submarines, gondolas that turn into hovercrafts, or insane billionaires who wish to kill everybody and re-populate the world.


Blurb From the VHS Jacket: “James Bond is thrust into one of his most riveting adventures in this jam-packed free-for-all of outrageous stunts, passionate encounters and exciting confrontations.  In perhaps the best performance of his career, Roger Moore portrays Agent 007 with lethal determination.”


What Did I Learn?: A guy on skis can easily out-run a couple of speeding motorcycles when careening down a snowy mountain.


You Might Like This Movie If: You've always wanted to see Roger Moore star in a Sean Connery-style Bond film.


Really?: 1) That's how Blofeld meets his end? Sad... 2) The bad guy has a warehouse in Albania? Wasn't that country governed by a fanatical bunch of communists in 1981? 3) Wow...Melina's Citroen rolls over what - 30 times, and it keeps going. 4) I had a little trouble believing Bibi (Lynn-Holly Johnson) would fall head-over-heels for Roger Moore's Bond, who was about 53 at the time. 5) So, why wouldn't General Gogol shoot Bond after he throws the ATAC off the mountain? I would imagine he might be a bit pissed off about that. 6) The villain attempts to murder Bond and Melina with sharks...hey, that's original!


Rating: For Your Eyes Only is one of my favourite Bond movies, as it is very much a back-to-basics reaction to the silliness of Moonraker. The storyline is believable (or at least plausible), Carole Bouquet's Melina is a valuable partner for 007, the gadgets are kept to a minimum, and there's even some mystery: the audience doesn't even know the identity of the villain until well into the picture. While I've never been crazy about Sheena Easton's title song, Bill Conti keeps things moving with some excellent instrumental music (Runaway and Cortina are noteworthy). Highly recommended. 8.5/10 stars.