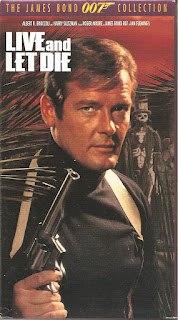 Moore-Dalton James Bond Movie #1 (Folks, I know this should be a review of the atrocious Diamond Are Forever. Thing is - and this is a bit embarrassing - I thought I owned a copy of DAF, and I don't. Even worse, I searched four thrift stores this evening and found nothing. I WILL review it, ASAP).


Blurb From the VHS Jacket: "James Bond battles the forces of black magid in this energetic, passionate adventure that hurtles from New York City to Louisiana bayou country."


What Did I Learn?: One good chase scene can really spice up a movie; three chase scenes, not so much.


You Might Like This Movie If: You want to see that creepy Geoffrey Holder guy push unhealthy junk to America's children.


Really?: 1) Kananga has both a shark tank and a monorail in his hideout...gee, that’s original for a Bond movie. 2) I realize three British agents have been murdered, but what exactly, is the urgency for 007 to get cracking on the case right now? Why do M and Moneypenny show up on his doorstep at 5AM? 3) I realize Solitaire predicts Bond’s arrival in New York, but how does he know what he looks like, or which taxi to follow? Is there a leak in MI6? 4) Why does Mr. Big require half of black New York to report on Bond’s excursion into Harlem when the cab driver is one of his flunkies? 5) I could ask why the CIA is operating on American soil, but let’s leave that aside for a minute...why does the black CIA agent force Bond to drop the pistol and raise his hands? I realize it makes for a suspenseful scene, but it makes no sense. 6) So, Bond openly admits that he’s going to New Orleans in order to use Solitaire as bait for Kananga...what a guy. 7) Wait – was Bond paying attention when his driver is killed with that poison dart? If he wasn’t, how did he get the license plate of the white pimpmobile? 8) Bond has a fistfight with a tougher opponent in a train compartment...didn’t we already see that in From Russia With Love?


Rating: Live and Let Die is a better Bond movie than Diamonds Are Forever, and its theme song is easily the best in the franchise, but that isn’t saying much. Live and Let Die is overly long, and often feels more like a cheesy blaxploitation film than a spy story.  And after a great first act, it quickly degenerates into one long chase scene after another. This was Roger Moore's first outing as Bond, and he's not bad. 6/10 stars.
http://www.imdb.com/title/tt0070328
Posted by Eli Schuster at 5:19 PM