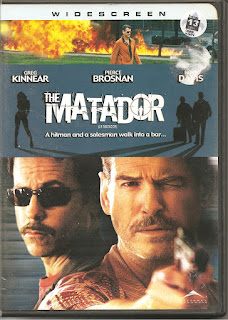 Not Quite a James Bond Movie (I don’t like any of the Pierce Brosnan 007 films, so I won’t be reviewing them – ever. That said, I think Brosnan is a talented actor, and he’s great in The Matador. I wish he could have played Bond a bit more like the way he portrays Julian).


Synopsis:  It's a bit like Grosse Point Blank, except that Martin - the assassin-with-a-heart-of-gold - meets Barney Rubble instead of Minnie Driver.


What Did I Learn?: 1) According to the main character, two things taste better in Mexico: margaritas and cock. 2) Killing people can be a good time.


Really?: 1) Danny seems surprisingly eager/willing to help out Julian near the end of the movie, yet he doesn't seem to need any reassurance that the target is a bad guy, rather than just another corporate victim. 2) Wouldn't Julian's agency realize that burnout is common among assassins and plan for it?


Rating: The Matador is a funny, clever, character-driven, and very well-written black comedy about friendship. Greg Kinnear and Hope Davis are both quite good, but Brosnan provides a tour-de-force performance as the scummy-yet-strangely likeable Julian. I'm not sure I entirely bought Danny's willingness to assist in the assassination of a fellow human being, so I can't give this film a perfect score, but it is highly recommended. 9/10 stars.