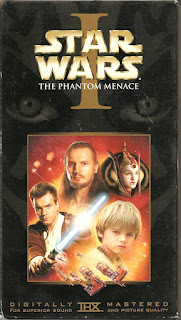 
Blurb From the VHS Jacket: "Every generation has a legend. Every journey has a first step. Every Saga has a beginning..."


What Did I Learn?: A communications disruption can only mean one thing – invasion.


You Might Like This Movie If: You realize that while Jake Lloyd's performance wasn't the greatest, the role of Anakin Skywalker/Darth Vader isn't easy to play.


Really?: 1) So wait...Anakin/Darth Vader created Luke, Leia and C-3PO? And he flew a mission with R2-D2? Give me a break... 2) Hmmm – Naboo has a Queen, and yet somebody says the planet is a democracy, and Her Highness was elected. Who, exactly, would elect a 13-year old to govern a planet? 3) Why in the world would Qui-Gon bring an idiot like Jar Jar to explore Tatooine? 4) Come to think of it, why would Qui-Gon bring Anakin (who’s what - 9 years old, and clearly too young to risk his life fighting a droid army) along on a dangerous mission back to Naboo? And with all the talk of child soldiers in other parts of the world, isn’t it a wee bit disturbing to see him piloting a fighter craft? 5) In Empire, I'm pretty sure Yoda said the Force encompasses all living things...I don't remember him or Ben Kenobi ever mentioning anything about "midi-chlorians." 6) So, Obi-Wan and Qui Gon stumble across Anakin totally by accident. That's some great writing, George.


Rating: To this day, I'm still not sure what prompted George Lucas to go back to the well and produce this second Star Wars trilogy. For one thing, they're prequels - we know how this story ends, and it's a bit of a bummer. The second reason is that he must have known these movies wouldn't be compared to the other summer blockbusters, or even the first trilogy; they would be compared to our memories of Star Wars/Empire/Jedi - as well as countless birthday parties, Christmas mornings, the first time a family owned a VCR, etc... Even if Lucas had created the science fiction equivalents of Citizen Kane, The Godfather and Godfather Part II, fans would have found the new films wanting.

Alas, Phantom Menace isn't even close to Citizen Kane. It's a dull, over-designed adventure with unrelatable (or, in Jar Jar's case - extremely annoying) characters, terrible dialogue and too many "Really?" moments for my taste. That said, I like Liam Neeson's performance, and the two-on-one lightsabre duel is pretty cool, so I'll barely recommend this movie. 5.5/10 stars.