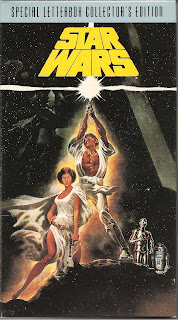 Star Wars Movie #1 (Yes, I realize Star Wars is officially Episode IV, A New Hope – I’m going chronologically by release date. You may also note that this is the original version of the film; I’ve seen the tacky CGI effects George Lucas added to later releases of the first trilogy, and I'll just say that I’m not terribly impressed. Oh, and don’t even get me started on that atrocious Greedo-shoots-first bullshit)

Please click the link to read my review of Star Trek: The Motion Picture.


Blurb From the VHS Jacket: "STAR WARS is an elaborately-spectacular film that represents the ultimate in cinematic entertainment."


What Did I Learn?: 1) The Tosche station is a great place to pick up some power converters. 2) Travelling through hyperspace ain't like dusting crops. 3) Your eyes can deceive you - don't trust them.


You Might Like This Movie If: You really, really love that famous Star Wars theme, and firmly believe John Williams should have added some lyrics.


Really?: 1) I realize Star Wars takes place a long time ago, in a galaxy far, far away, but it’s interesting how everything seems to happen at just the right time: a) just as Luke gets concerned that R2-D2 has lost Leia’s message, his aunt calls him; b) the Falcon gets to Alderaan just after it has been blown to pieces, and guess what – the Death Star (with the Princess on board) is in the neighbourhood; c) the Death Star is the size of a “small moon”, and yet everyone has reassembled in the docking area and boards the Falcon at just the right time. 2) Ok, the Mos Eisley cantina is a rough place, but come on: two unrelated killings in the course of what – five minutes? Who the fuck would ever drink there? 3) Wait – does Tarkin have the Emperor’s authority to just blow up Alderaan? Don’t they pay taxes? Wouldn’t that hurt the Imperial economy? 4) Wow...the Rebels don't need a long time to analyze the Death Star plans to figure out its weak spot, do they? And that's fortunate, because the Death Star is closing in, fast! 5) Ok, Luke was instrumental in rescuing the Princess, but has he ever flown an X-Wing Fighter before? Would the Rebels just allow him to use one of theirs? 6) It's a good thing the Imperial gunners don't decide to blow up that escape pod, or there wouldn't be much of a movie.


Rating: Much like The Breakfast Club, Star Wars is such an iconic movie from my childhood that it's difficult to review it objectively; for years, I avoided the Star Wars trilogy like a plague because my brother and I had seen these films so many times we could recite dialogue, almost word-for word.

Looking at the film through somewhat fresh eyes, I can say that the magic is still there, and Star Wars is a fun adventure. That said, the dialogue is mostly God-awful, some of the acting seems wooden (an example would be a scene between Han and Leia in the Falcon after they have evaded the TIE fighters), and I had a bit of trouble believing everything could be so perfectly timed (see "Really?"). At the risk of offending my brother Joel, my friend Ed Stanley, and my friend and co-worker Gisele, I'm going to give Star Wars 8.5/10 stars.